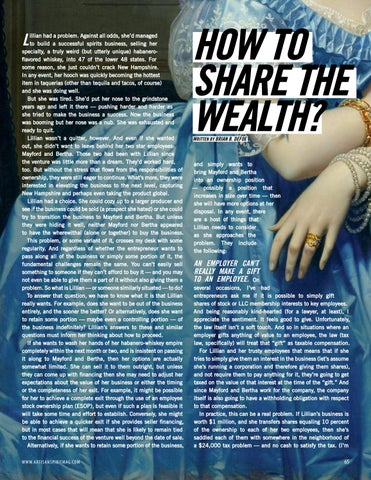 illian had a problem. Against all odds, she’d managed to build a successful spirits business, selling her specialty, a truly weird (but utterly unique) habaneroflavored whiskey, into 47 of the lower 48 states. For some reason, she just couldn’t crack New Hampshire. In any event, her hooch was quickly becoming the hottest item in taquerias (other than tequila and tacos, of course) and she was doing well. But she was tired. She’d put her nose to the grindstone years ago and left it there — pushing harder and harder as she tried to make the business a success. Now the business was booming but her nose was a nub. She was exhausted and ready to quit. Lillian wasn’t a quitter, however. And even if she wanted out, she didn’t want to leave behind her two star employees: Mayford and Bertha. Those two had been with Lillian since the venture was little more than a dream. They’d worked hard, too. But without the stress that flows from the responsibilities of ownership, they were still eager to continue. What’s more, they were interested in elevating the business to the next level, capturing New Hampshire and perhaps even taking the product global. Lillian had a choice. She could cozy up to a larger producer and see if the business could be sold (a prospect she hated) or she could try to transition the business to Mayford and Bertha. But unless they were hiding it well, neither Mayford nor Bertha appeared to have the wherewithal (alone or together) to buy the business. This problem, or some variant of it, crosses my desk with some regularity. And regardless of whether the entrepreneur wants to pass along all of the business or simply some portion of it, the fundamental challenges remain the same. You can’t easily sell something to someone if they can’t afford to buy it — and you may not even be able to give them a part of it without also giving them a problem. So what is Lillian — or someone similarly situated — to do? To answer that question, we have to know what it is that Lillian really wants. For example, does she want to be out of the business entirely, and the sooner the better? Or alternatively, does she want to retain some portion — maybe even a controlling portion — of the business indefinitely? Lillian’s answers to these and similar questions must inform her thinking about how to proceed. If she wants to wash her hands of her habanero-whiskey empire completely within the next month or two, and is insistent on passing it along to Mayford and Bertha, then her options are actually somewhat limited. She can sell it to them outright, but unless they can come up with financing then she may need to adjust her expectations about the value of her business or either the timing or the completeness of her exit. For example, it might be possible for her to achieve a complete exit through the use of an employee stock ownership plan (ESOP), but even if such a plan is feasible it will take some time and effort to establish. Conversely, she might be able to achieve a quicker exit if she provides seller financing, but in most cases that will mean that she is likely to remain tied to the financial success of the venture well beyond the date of sale. Alternatively, if she wants to retain some portion of the business, WWW.ART ISANSP IRITMAG.COM

HOW TO SHARE THE WEALTH? WRITTEN BY BRIAN B. DEFOE

and simply wants to bring Mayford and Bertha into an ownership position — possibly a position that increases in size over time — then she will have more options at her disposal. In any event, there are a host of things that Lillian needs to consider as she approaches the problem. They include the following:

AN EMPLOYER CAN’T REALLY MAKE A GIFT TO AN EMPLOYEE. On several occasions, I’ve had entrepreneurs ask me if it is possible to simply gift shares of stock or LLC membership interests to key employees. And being reasonably kind-hearted (for a lawyer, at least), I appreciate the sentiment. It feels good to give. Unfortunately, the law itself isn’t a soft touch. And so in situations where an employer gifts anything of value to an employee, the law (tax law, specifically) will treat that “gift” as taxable compensation. For Lillian and her trusty employees that means that if she tries to simply give them an interest in the business (let’s assume she’s running a corporation and therefore giving them shares), and not require them to pay anything for it, they’re going to get taxed on the value of that interest at the time of the “gift.” And since Mayford and Bertha work for the company, the company itself is also going to have a withholding obligation with respect to that compensation. In practice, this can be a real problem. If Lillian’s business is worth $1 million, and she transfers shares equaling 10 percent of the ownership to each of her two employees, then she’s saddled each of them with somewhere in the neighborhood of a $24,000 tax problem — and no cash to satisfy the tax. (I’m