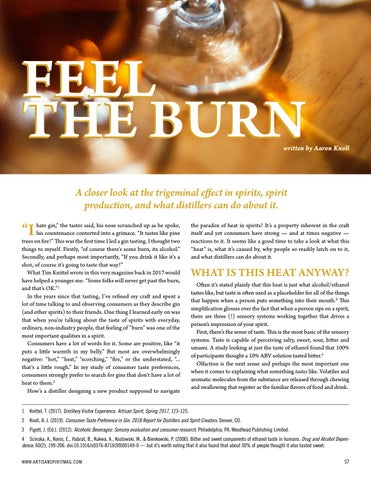 A closer look at the trigeminal effect in spirits, spirit production, and what distillers can do about it.

hate gin,” the taster said, his nose scrunched up as he spoke, his countenance contorted into a grimace. “It tastes like pine trees on fire!” This was the first time I led a gin tasting. I thought two things to myself. Firstly, “of course there’s some burn, its alcohol.” Secondly, and perhaps most importantly, “If you drink it like it’s a shot, of course it’s going to taste that way!” What Tim Knittel wrote in this very magazine back in 2017 would have helped a younger me: “Some folks will never get past the burn, and that’s OK.”1 In the years since that tasting, I’ve refined my craft and spent a lot of time talking to and observing consumers as they describe gin (and other spirits) to their friends. One thing I learned early on was that when you’re talking about the taste of spirits with everyday, ordinary, non-industry people, that feeling of “burn” was one of the most important qualities in a spirit. Consumers have a lot of words for it. Some are positive, like “it puts a little warmth in my belly.” But most are overwhelmingly negative: “hot,” “heat,” “scorching,” “fire,” or the understated, “... that’s a little rough.” In my study of consumer taste preferences, consumers strongly prefer to search for gins that don’t have a lot of heat to them.2 How’s a distiller designing a new product supposed to navigate

the paradox of heat in spirits? It’s a property inherent in the craft itself and yet consumers have strong — and at times negative — reactions to it. It seems like a good time to take a look at what this “heat” is, what it’s caused by, why people so readily latch on to it, and what distillers can do about it.

WHAT IS THIS HEAT ANYWAY? Often it’s stated plainly that this heat is just what alcohol/ethanol tastes like, but taste is often used as a placeholder for all of the things that happen when a person puts something into their mouth.3 This simplification glosses over the fact that when a person sips on a spirit, there are three (!) sensory systems working together that drives a person’s impression of your spirit. First, there’s the sense of taste. This is the most basic of the sensory systems. Taste is capable of perceiving salty, sweet, sour, bitter and umami. A study looking at just the taste of ethanol found that 100% of participants thought a 10% ABV solution tasted bitter.4 Olfaction is the next sense and perhaps the most important one when it comes to explaining what something tastes like. Volatiles and aromatic molecules from the substance are released through chewing and swallowing that register as the familiar flavors of food and drink.