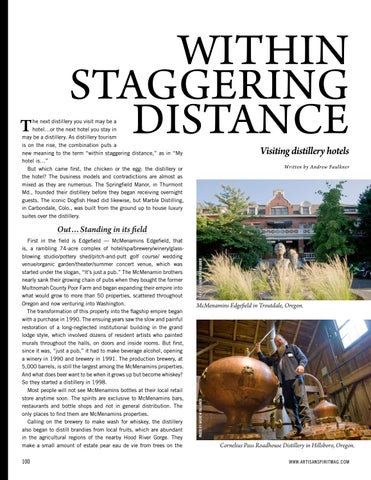 he next distillery you visit may be a hotel…or the next hotel you stay in may be a distillery. As distillery tourism is on the rise, the combination puts a new meaning to the term “within staggering distance,” as in “My hotel is…” But which came first, the chicken or the egg: the distillery or the hotel? The business models and contradictions are almost as mixed as they are numerous. The Springfield Manor, in Thurmont Md., founded their distillery before they began receiving overnight guests. The iconic Dogfish Head did likewise, but Marble Distilling, in Carbondale, Colo., was built from the ground up to house luxury suites over the distillery.

First in the field is Edgefield — McMenamins Edgefield, that is, a rambling 74-acre complex of hotel/spa/brewery/winery/glassblowing studio/pottery shed/pitch-and-putt golf course/ wedding venue/organic garden/theater/summer concert venue, which was started under the slogan, “It’s just a pub.” The McMenamin brothers nearly sank their growing chain of pubs when they bought the former Multnomah County Poor Farm and began expanding their empire into what would grow to more than 50 properties, scattered throughout Oregon and now venturing into Washington. The transformation of this property into the flagship empire began with a purchase in 1990. The ensuing years saw the slow and painful restoration of a long-neglected institutional building in the grand lodge style, which involved dozens of resident artists who painted murals throughout the halls, on doors and inside rooms. But first, since it was, “just a pub,” it had to make beverage alcohol, opening a winery in 1990 and brewery in 1991. The production brewery, at 5,000 barrels, is still the largest among the McMenamins properties. And what does beer want to be when it grows up but become whiskey? So they started a distillery in 1998. Most people will not see McMenamins bottles at their local retail store anytime soon. The spirits are exclusive to McMenamins bars, restaurants and bottle shops and not in general distribution. The only places to find them are McMenamins properties. Calling on the brewery to make wash for whiskey, the distillery also began to distill brandies from local fruits, which are abundant in the agricultural regions of the nearby Hood River Gorge. They make a small amount of estate pear eau de vie from trees on the