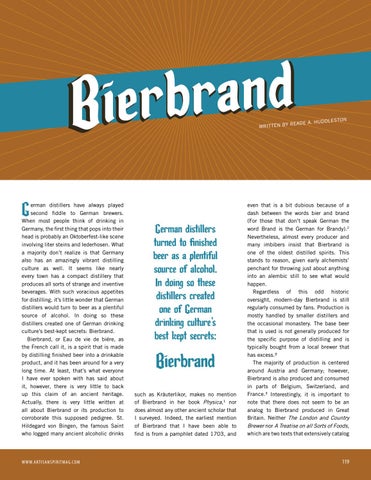 DDLESTON READE A. HU WRITTEN BY

erman distillers have always played second fiddle to German brewers. When most people think of drinking in Germany, the first thing that pops into their head is probably an Oktoberfest-like scene involving liter steins and lederhosen. What a majority don’t realize is that Germany also has an amazingly vibrant distilling culture as well. It seems like nearly every town has a compact distillery that produces all sorts of strange and inventive beverages. With such voracious appetites for distilling, it’s little wonder that German distillers would turn to beer as a plentiful source of alcohol. In doing so these distillers created one of German drinking culture’s best-kept secrets: Bierbrand. Bierbrand, or Eau de vie de biére, as the French call it, is a spirit that is made by distilling finished beer into a drinkable product, and it has been around for a very long time. At least, that’s what everyone I have ever spoken with has said about it, however, there is very little to back up this claim of an ancient heritage. Actually, there is very little written at all about Bierbrand or its production to corroborate this supposed pedigree. St. Hildegard von Bingen, the famous Saint who logged many ancient alcoholic drinks

German distillers turned to finished beer as a plentiful source of alcohol. In doing so these distillers created one of German drinking culture’s best kept secrets:

even that is a bit dubious because of a dash between the words bier and brand (For those that don’t speak German the word Brand is the German for Brandy).2 Nevertheless, almost every producer and many imbibers insist that Bierbrand is one of the oldest distilled spirits. This stands to reason, given early alchemists’ penchant for throwing just about anything into an alembic still to see what would happen. Regardless of this odd historic oversight, modern-day Bierbrand is still regularly consumed by fans. Production is mostly handled by smaller distillers and the occasional monastery. The base beer that is used is not generally produced for the specific purpose of distilling and is typically bought from a local brewer that has excess.³ The majority of production is centered around Austria and Germany; however, Bierbrand is also produced and consumed in parts of Belgium, Switzerland, and France.3 Interestingly, it is important to note that there does not seem to be an analog to Bierbrand produced in Great Britain. Neither The London and Country Brewer nor A Treatise on all Sorts of Foods, which are two texts that extensively catalog