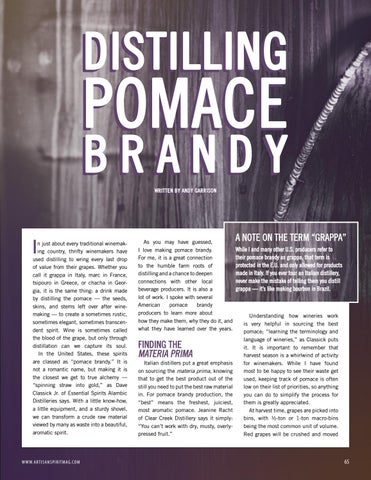 n just about every traditional winemaking country, thrifty winemakers have used distilling to wring every last drop of value from their grapes. Whether you call it grappa in Italy, marc in France, tsipouro in Greece, or chacha in Georgia, it is the same thing: a drink made by distilling the pomace — the seeds, skins, and stems left over after winemaking — to create a sometimes rustic, sometimes elegant, sometimes transcendent spirit. Wine is sometimes called the blood of the grape, but only through distillation can we capture its soul. In the United States, these spirits are classed as “pomace brandy.” It is not a romantic name, but making it is the closest we get to true alchemy — “spinning straw into gold,” as Dave Classick Jr. of Essential Spirits Alambic Distilleries says. With a little know-how, a little equipment, and a sturdy shovel, we can transform a crude raw material viewed by many as waste into a beautiful, aromatic spirit.

As you may have guessed, I love making pomace brandy. For me, it is a great connection to the humble farm roots of distilling and a chance to deepen connections with other local beverage producers. It is also a lot of work. I spoke with several American pomace brandy producers to learn more about how they make them, why they do it, and what they have learned over the years.

FINDING THE MATERIA PRIMA Italian distillers put a great emphasis on sourcing the materia prima, knowing that to get the best product out of the still you need to put the best raw material in. For pomace brandy production, the “best” means the freshest, juiciest, most aromatic pomace. Jeanine Racht of Clear Creek Distillery says it simply: “You can’t work with dry, musty, overlypressed fruit.”

A NOTE ON THE TERM “GRAPPA” While I and many other U.S. producers refer to their pomace brandy as grappa, that term is protected in the E.U. and only allowed for products made in Italy. If you ever tour an Italian distillery, never make the mistake of telling them you distill grappa — it’s like making bourbon in Brazil.

Understanding how wineries work is very helpful in sourcing the best pomace; “learning the terminology and language of wineries,” as Classick puts it. It is important to remember that harvest season is a whirlwind of activity for winemakers. While I have found most to be happy to see their waste get used, keeping track of pomace is often low on their list of priorities, so anything you can do to simplify the process for them is greatly appreciated. At harvest time, grapes are picked into bins, with ½-ton or 1-ton macro-bins being the most common unit of volume. Red grapes will be crushed and moved