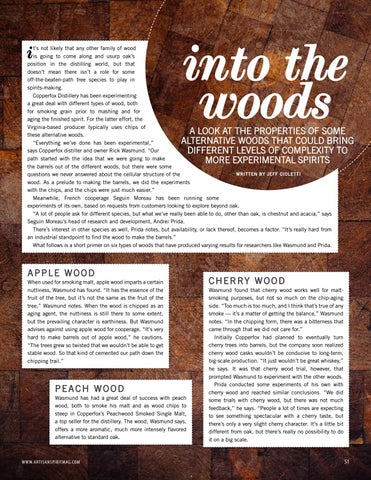 t’s not likely that any other family of wood is going to come along and usurp oak’s position in the distilling world, but that doesn’t mean there isn’t a role for some off-the-beaten-path tree species to play in spirits-making. Copperfox Distillery has been experimenting a great deal with different types of wood, both for smoking grain prior to mashing and for aging the finished spirit. For the latter effort, the Virginia-based producer typically uses chips of these alternative woods. “Everything we’ve done has been experimental,” says Copperfox distiller and owner Rick Wasmund. “Our path started with the idea that we were going to make the barrels out of the different woods, but there were some WRITTEN BY JEFF CIOLETTI questions we never answered about the cellular structure of the wood. As a prelude to making the barrels, we did the experiments with the chips, and the chips were just much easier.” Meanwhile, French cooperage Seguin Moreau has been running some experiments of its own, based on requests from customers looking to explore beyond oak. “A lot of people ask for different species, but what we’ve really been able to do, other than oak, is chestnut and acacia,” says Seguin Moreau’s head of research and development, Andrei Prida. There’s interest in other species as well, Prida notes, but availability, or lack thereof, becomes a factor. “It’s really hard from an industrial standpoint to find the wood to make the barrels.” What follows is a short primer on six types of woods that have produced varying results for researchers like Wasmund and Prida.

APPLE WOOD When used for smoking malt, apple wood imparts a certain nuttiness, Wasmund has found. “It has the essence of the fruit of the tree, but it’s not the same as the fruit of the tree,” Wasmund notes. When the wood is chipped as an aging agent, the nuttiness is still there to some extent, but the prevailing character is earthiness. But Wasmund advises against using apple wood for cooperage. “It’s very hard to make barrels out of apple wood,” he cautions. “The trees grew so twisted that we wouldn’t be able to get stable wood. So that kind of cemented our path down the chipping trail.”

PEACH WOOD Wasmund has had a great deal of success with peach wood, both to smoke his malt and as wood chips to steep in Copperfox’s Peachwood Smoked Single Malt, a top seller for the distillery. The wood, Wasmund says, offers a more aromatic, much more intensely flavored alternative to standard oak.

C H E R RY W O O D Wasmund found that cherry wood works well for maltsmoking purposes, but not so much on the chip-aging side. “Too much is too much, and I think that’s true of any smoke — it’s a matter of getting the balance,” Wasmund notes. “In the chipping form, there was a bitterness that came through that we did not care for.” Initially Copperfox had planned to eventually turn cherry trees into barrels, but the company soon realized cherry wood casks wouldn’t be conducive to long-term, big-scale production. “It just wouldn’t be great whiskey,” he says. It was that cherry wood trial, however, that prompted Wasmund to experiment with the other woods. Prida conducted some experiments of his own with cherry wood and reached similar conclusions. “We did some trials with cherry wood, but there was not much feedback,” he says. “People a lot of times are expecting to see something spectacular with a cherry taste, but there’s only a very slight cherry character. It’s a little bit different from oak, but there’s really no possibility to do it on a big scale.