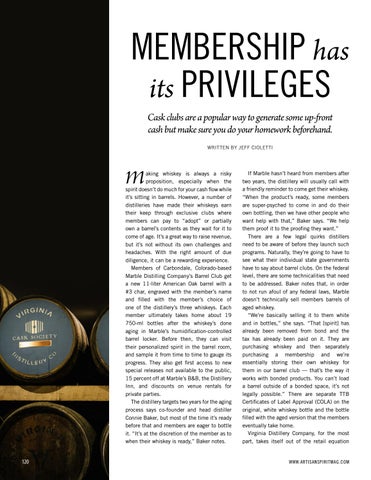 MEMBERSHIP has its PRIVILEGES Cask clubs are a popular way to generate some up-front cash but make sure you do your homework beforehand. WRITTEN BY JEFF CIOLETTI

aking whiskey is always a risky proposition, especially when the spirit doesn’t do much for your cash flow while it’s sitting in barrels. However, a number of distilleries have made their whiskeys earn their keep through exclusive clubs where members can pay to “adopt” or partially own a barrel’s contents as they wait for it to come of age. It’s a great way to raise revenue, but it’s not without its own challenges and headaches. With the right amount of due diligence, it can be a rewarding experience. Members of Carbondale, Colorado-based Marble Distilling Company’s Barrel Club get a new 11-liter American Oak barrel with a #3 char, engraved with the member’s name and filled with the member’s choice of one of the distillery’s three whiskeys. Each member ultimately takes home about 19 750-ml bottles after the whiskey’s done aging in Marble’s humidification-controlled barrel locker. Before then, they can visit their personalized spirit in the barrel room, and sample it from time to time to gauge its progress. They also get first access to new special releases not available to the public, 15 percent off at Marble’s B&amp;B, the Distillery Inn, and discounts on venue rentals for private parties. The distillery targets two years for the aging process says co-founder and head distiller Connie Baker, but most of the time it’s ready before that and members are eager to bottle it. “It’s at the discretion of the member as to when their whiskey is ready,” Baker notes.

If Marble hasn’t heard from members after two years, the distillery will usually call with a friendly reminder to come get their whiskey. “When the product’s ready, some members are super-psyched to come in and do their own bottling, then we have other people who want help with that,” Baker says. “We help them proof it to the proofing they want.” There are a few legal quirks distillers need to be aware of before they launch such programs. Naturally, they’re going to have to see what their individual state governments have to say about barrel clubs. On the federal level, there are some technicalities that need to be addressed. Baker notes that, in order to not run afoul of any federal laws, Marble doesn’t technically sell members barrels of aged whiskey. “We’re basically selling it to them white and in bottles,” she says. “That [spirit] has already been removed from bond and the tax has already been paid on it. They are purchasing whiskey and then separately purchasing a membership and we’re essentially storing their own whiskey for them in our barrel club — that’s the way it works with bonded products. You can’t load a barrel outside of a bonded space, it’s not legally possible.” There are separate TTB Certificates of Label Approval (COLA) on the original, white whiskey bottle and the bottle filled with the aged version that the members eventually take home. Virginia Distillery Company, for the most part, takes itself out of the retail equation