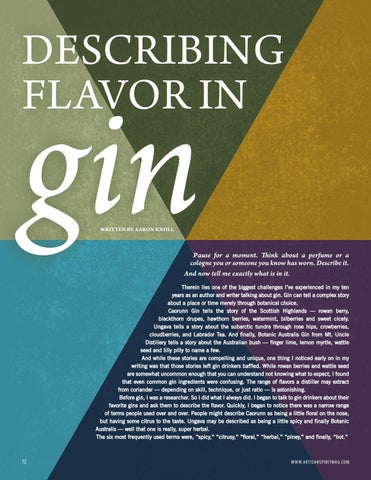 Pause for a moment. Think about a perfume or a cologne you or someone you know has worn. Describe it. And now tell me exactly what is in it.

Therein lies one of the biggest challenges I’ve experienced in my ten years as an author and writer talking about gin. Gin can tell a complex story about a place or time merely through botanical choice. Caorunn Gin tells the story of the Scottish Highlands — rowan berry, blackthorn drupes, hawthorn berries, watermint, bilberries and sweet cicely. Ungava tells a story about the subarctic tundra through rose hips, crowberries, cloudberries, and Labrador Tea. And finally, Botanic Australis Gin from Mt. Uncle Distillery tells a story about the Australian bush — finger lime, lemon myrtle, wattle seed and lilly pilly to name a few. And while these stories are compelling and unique, one thing I noticed early on in my writing was that those stories left gin drinkers baffled. While rowan berries and wattle seed are somewhat uncommon enough that you can understand not knowing what to expect, I found that even common gin ingredients were confusing. The range of flavors a distiller may extract from coriander — depending on skill, technique, or just ratio — is astonishing. Before gin, I was a researcher. So I did what I always did. I began to talk to gin drinkers about their favorite gins and ask them to describe the flavor. Quickly, I began to notice there was a narrow range of terms people used over and over. People might describe Caorunn as being a little floral on the nose, but having some citrus to the taste. Ungava may be described as being a little spicy and finally Botanic Australis — well that one is really, super herbal. The six most frequently used terms were, “spicy,” “citrusy,” “floral,” “herbal,” “piney,” and finally, “hot.”