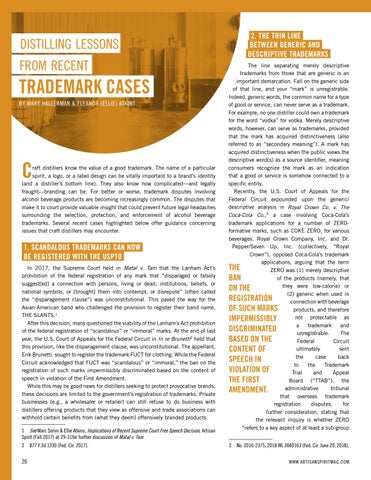 raft distillers know the value of a good trademark. The name of a particular spirit, a logo, or a label design can be vitally important to a brand’s identity (and a distiller’s bottom line). They also know how complicated—and legally fraught—branding can be. For better or worse, trademark disputes involving alcohol beverage products are becoming increasingly common. The disputes that make it to court provide valuable insight that could prevent future legal headaches surrounding the selection, protection, and enforcement of alcohol beverage trademarks. Several recent cases highlighted below offer guidance concerning issues that craft distillers may encounter.

1. SCANDALOUS TRADEMARKS CAN NOW BE REGISTERED WITH THE USPTO In 2017, the Supreme Court held in Matal v. Tam that the Lanham Act’s prohibition of the federal registration of any mark that “disparaged or falsely suggest[ed] a connection with persons, living or dead, institutions, beliefs, or national symbols, or [brought] them into contempt, or disrepute” (often called the “disparagement clause”) was unconstitutional. This paved the way for the Asian-American band who challenged the provision to register their band name, THE SLANTS.1 After this decision, many questioned the viability of the Lanham’s Act prohibition of the federal registration of “scandalous” or “immoral” marks. At the end of last year, the U.S. Court of Appeals for the Federal Circuit in In re Brunetti2 held that this provision, like the disparagement clause, was unconstitutional. The appellant, Erik Brunetti, sought to register the trademark FUCT for clothing. While the Federal Circuit acknowledged that FUCT was “scandalous” or “immoral,” the ban on the registration of such marks impermissibly discriminated based on the content of speech in violation of the First Amendment. While this may be good news for distillers seeking to protect provocative brands, these decisions are limited to the government’s registration of trademarks. Private businesses (e.g., a wholesaler or retailer) can still refuse to do business with distillers offering products that they view as offensive and trade associations can withhold certain benefits from (what they deem) offensively branded products. 1  See Marc Sorini &amp; Ellie Atkins, Implications of Recent Supreme Court Free Speech Decision, Artisan Spirit (Fall 2017) at 29-31for further discussion of Matal v. Tam. 2  877 F.3d 1330 (Fed. Cir. 2017).

2. THE THIN LINE BETWEEN GENERIC AND DESCRIPTIVE TRADEMARKS The line separating merely descriptive trademarks from those that are generic is an important demarcation. Fall on the generic side of that line, and your “mark” is unregistrable. Indeed, generic words, the common name for a type of good or service, can never serve as a trademark. For example, no one distiller could own a trademark for the word “vodka” for vodka. Merely descriptive words, however, can serve as trademarks, provided that the mark has acquired distinctiveness (also referred to as “secondary meaning”). A mark has acquired distinctiveness when the public views the descriptive word(s) as a source identifier, meaning consumers recognize the mark as an indication that a good or service is somehow connected to a specific entity. Recently, the U.S. Court of Appeals for the Federal Circuit expounded upon the generic/ descriptive analysis in Royal Crown Co. v. The Coca-Cola Co.,3 a case involving Coca-Cola’s trademark applications for a number of ZEROformative marks, such as COKE ZERO, for various beverages. Royal Crown Company, Inc. and Dr. Pepper/Seven Up, Inc. (collectively, “Royal Crown”), opposed Coca-Cola’s trademark applications, arguing that the term THE ZERO was (1) merely descriptive of the products (namely, that BAN they were low-calorie) or ON THE (2) generic when used in REGISTRATION connection with beverage OF SUCH MARKS products, and therefore not protectable as IMPERMISSIBLY a trademark and DISCRIMINATED unregistrable. The BASED ON THE Federal Circuit ultimately sent CONTENT OF the case back SPEECH IN to the Trademark VIOLATION OF Trial and Appeal THE FIRST Board (“TTAB”), the administrative tribunal AMENDMENT. that oversees trademark registration disputes, for further consideration, stating that the relevant inquiry is whether ZERO “refers to a key aspect of at least a sub-group 3  No. 2016-2375, 2018 WL 3040163 (Fed. Cir. June 20, 2018). WWW.ARTISANSPIRITMAG.COM