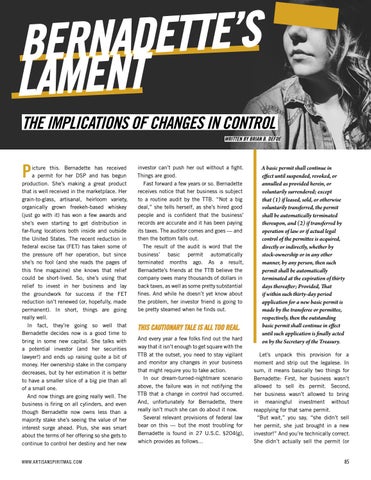 S ’ E T T E D A BERN LAMENT THE IMPLICATIONS OF CHANGES IN CONTROL WRITTEN BY BRIAN B. DEFOE

icture this. Bernadette has received a permit for her DSP and has begun production. She’s making a great product that is well received in the marketplace. Her grain-to-glass, artisanal, heirloom variety, organically grown freekeh-based whiskey (just go with it) has won a few awards and she’s even starting to get distribution in far-flung locations both inside and outside the United States. The recent reduction in federal excise tax (FET) has taken some of the pressure off her operation, but since she’s no fool (and she reads the pages of this fine magazine) she knows that relief could be short-lived. So, she’s using that relief to invest in her business and lay the groundwork for success if the FET reduction isn’t renewed (or, hopefully, made permanent). In short, things are going really well. In fact, they’re going so well that Bernadette decides now is a good time to bring in some new capital. She talks with a potential investor (and her securities lawyer!) and ends up raising quite a bit of money. Her ownership stake in the company decreases, but by her estimation it is better to have a smaller slice of a big pie than all of a small one. And now things are going really well. The business is firing on all cylinders, and even though Bernadette now owns less than a majority stake she’s seeing the value of her interest surge ahead. Plus, she was smart about the terms of her offering so she gets to continue to control her destiny and her new WWW.ARTISANSPIRITMAG.COM

investor can’t push her out without a fight. Things are good. Fast forward a few years or so. Bernadette receives notice that her business is subject to a routine audit by the TTB. “Not a big deal,” she tells herself, as she’s hired good people and is confident that the business’ records are accurate and it has been paying its taxes. The auditor comes and goes — and then the bottom falls out. The result of the audit is word that the business’ basic permit automatically terminated months ago. As a result, Bernadette’s friends at the TTB believe the company owes many thousands of dollars in back taxes, as well as some pretty substantial fines. And while he doesn’t yet know about the problem, her investor friend is going to be pretty steamed when he finds out.

THIS CAUTIONARY TALE IS ALL TOO REAL. And every year a few folks find out the hard way that it isn’t enough to get square with the TTB at the outset, you need to stay vigilant and monitor any changes in your business that might require you to take action. In our dream-turned-nightmare scenario above, the failure was in not notifying the TTB that a change in control had occurred. And, unfortunately for Bernadette, there really isn’t much she can do about it now. Several relevant provisions of federal law bear on this — but the most troubling for Bernadette is found in 27 U.S.C. §204(g), which provides as follows...

A basic permit shall continue in effect until suspended, revoked, or annulled as provided herein, or voluntarily surrendered; except that (1) if leased, sold, or otherwise voluntarily transferred, the permit shall be automatically terminated thereupon, and (2) if transferred by operation of law or if actual legal control of the permittee is acquired, directly or indirectly, whether by stock-ownership or in any other manner, by any person, then such permit shall be automatically terminated at the expiration of thirty days thereafter; Provided, That if within such thirty-day period application for a new basic permit is made by the transferee or permittee, respectively, then the outstanding basic permit shall continue in effect until such application is finally acted on by the Secretary of the Treasury. Let’s unpack this provision for a moment and strip out the legalese. In sum, it means basically two things for Bernadette: First, her business wasn’t allowed to sell its permit. Second, her business wasn’t allowed to bring in meaningful investment without reapplying for that same permit. “But wait,” you say, “she didn’t sell her permit, she just brought in a new investor!” And you’re technically correct. She didn’t actually sell the permit (or