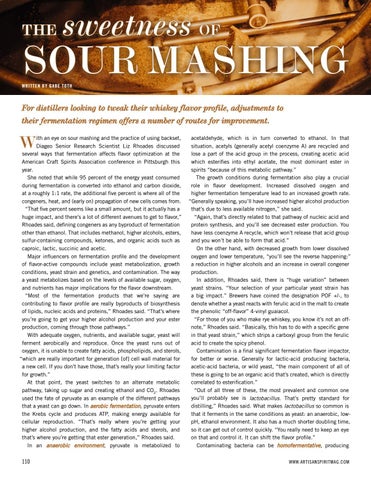 For distillers looking to tweak their whiskey flavor profile, adjustments to their fermentation regimen offers a number of routes for improvement.

ith an eye on sour mashing and the practice of using backset, Diageo Senior Research Scientist Liz Rhoades discussed several ways that fermentation affects flavor optimization at the American Craft Spirits Association conference in Pittsburgh this year. She noted that while 95 percent of the energy yeast consumed during fermentation is converted into ethanol and carbon dioxide, at a roughly 1:1 rate, the additional five percent is where all of the congeners, heat, and (early on) propagation of new cells comes from. “That five percent seems like a small amount, but it actually has a huge impact, and there’s a lot of different avenues to get to flavor,” Rhoades said, defining congeners as any byproduct of fermentation other than ethanol. That includes methanol, higher alcohols, esters, sulfur-containing compounds, ketones, and organic acids such as caproic, lactic, succinic and acetic. Major influencers on fermentation profile and the development of flavor-active compounds include yeast metabolization, growth conditions, yeast strain and genetics, and contamination. The way a yeast metabolizes based on the levels of available sugar, oxygen, and nutrients has major implications for the flavor downstream. “Most of the fermentation products that we’re saying are contributing to flavor profile are really byproducts of biosynthesis of lipids, nucleic acids and proteins,” Rhoades said. “That’s where you’re going to get your higher alcohol production and your ester production, coming through those pathways.” With adequate oxygen, nutrients, and available sugar, yeast will ferment aerobically and reproduce. Once the yeast runs out of oxygen, it is unable to create fatty acids, phospholipids, and sterols, “which are really important for generation [of] cell wall material for a new cell. If you don’t have those, that’s really your limiting factor for growth.” At that point, the yeast switches to an alternate metabolic pathway, taking up sugar and creating ethanol and CO2. Rhoades used the fate of pyruvate as an example of the different pathways that a yeast can go down. In aerobic fermentation, pyruvate enters the Krebs cycle and produces ATP, making energy available for cellular reproduction. “That’s really where you’re getting your higher alcohol production, and the fatty acids and sterols, and that’s where you’re getting that ester generation,” Rhoades said. In an anaerobic environment, pyruvate is metabolized to

acetaldehyde, which is in turn converted to ethanol. In that situation, acetyls (generally acetyl coenzyme A) are recycled and lose a part of the acid group in the process, creating acetic acid which esterifies into ethyl acetate, the most dominant ester in spirits “because of this metabolic pathway.” The growth conditions during fermentation also play a crucial role in flavor development. Increased dissolved oxygen and higher fermentation temperature lead to an increased growth rate. “Generally speaking, you’ll have increased higher alcohol production that’s due to less available nitrogen,” she said. “Again, that’s directly related to that pathway of nucleic acid and protein synthesis, and you’ll see decreased ester production. You have less coenzyme A recycle, which won’t release that acid group and you won’t be able to form that acid.” On the other hand, with decreased growth from lower dissolved oxygen and lower temperature, “you’ll see the reverse happening:” a reduction in higher alcohols and an increase in overall congener production. In addition, Rhoades said, there is “huge variation” between yeast strains. “Your selection of your particular yeast strain has a big impact.” Brewers have coined the designation POF +/-, to denote whether a yeast reacts with ferulic acid in the malt to create the phenolic “off-flavor” 4-vinyl guaiacol. “For those of you who make rye whiskey, you know it’s not an offnote,” Rhoades said. “Basically, this has to do with a specific gene in that yeast strain,” which strips a carboxyl group from the ferulic acid to create the spicy phenol. Contamination is a final significant fermentation flavor impactor, for better or worse. Generally for lactic-acid producing bacteria, acetic-acid bacteria, or wild yeast, “the main component of all of these is going to be an organic acid that’s created, which is directly correlated to esterification.” “Out of all three of these, the most prevalent and common one you’ll probably see is lactobacillus. That’s pretty standard for distilling,” Rhoades said. What makes lactobacillus so common is that it ferments in the same conditions as yeast: an anaerobic, lowpH, ethanol environment. It also has a much shorter doubling time, so it can get out of control quickly. “You really need to keep an eye on that and control it. It can shift the flavor profile.” Contaminating bacteria can be homofermentative, producing WWW.ARTISANSPIRITMAG.COM