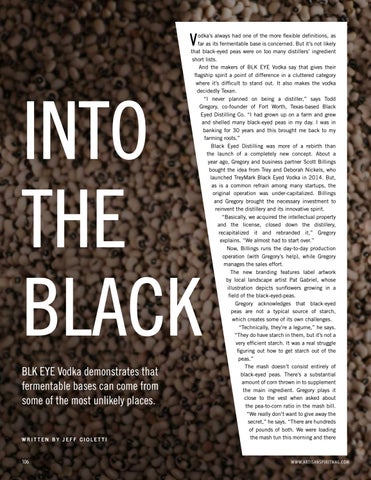 odka’s always had one of the more flexible definitions, as far as its fermentable base is concerned. But it’s not likely that black-eyed peas were on too many distillers’ ingredient short lists. And the makers of BLK EYE Vodka say that gives their flagship spirit a point of difference in a cluttered category where it’s difficult to stand out. It also makes the vodka decidedly Texan. “I never planned on being a distiller,” says Todd Gregory, co-founder of Fort Worth, Texas-based Black Eyed Distilling Co. “I had grown up on a farm and grew and shelled many black-eyed peas in my day. I was in banking for 30 years and this brought me back to my farming roots.” Black Eyed Distilling was more of a rebirth than the launch of a completely new concept. About a year ago, Gregory and business partner Scott Billings bought the idea from Trey and Deborah Nickels, who launched TreyMark Black Eyed Vodka in 2014. But, as is a common refrain among many startups, the original operation was under-capitalized. Billings and Gregory brought the necessary investment to reinvent the distillery and its innovative spirit. “Basically, we acquired the intellectual property and the license, closed down the distillery, recapitalized it and rebranded it,” Gregory explains. “We almost had to start over.” Now, Billings runs the day-to-day production operation (with Gregory’s help), while Gregory manages the sales effort. The new branding features label artwork by local landscape artist Pat Gabriel, whose illustration depicts sunflowers growing in a field of the black-eyed-peas. Gregory acknowledges that black-eyed peas are not a typical source of starch, which creates some of its own challenges. “Technically, they’re a legume,” he says. “They do have starch in them, but it’s not a very efficient starch. It was a real struggle figuring out how to get starch out of the peas.” The mash doesn’t consist entirely of black-eyed peas. There’s a substantial amount of corn thrown in to supplement the main ingredient. Gregory plays it close to the vest when asked about the pea-to-corn ratio in the mash bill. “We really don’t want to give away the secret,” he says. “There are hundreds of pounds of both. We were loading the mash tun this morning and there

INTO THE BLACK BLK EYE Vodka demonstrates that fermentable bases can come from some of the most unlikely places.