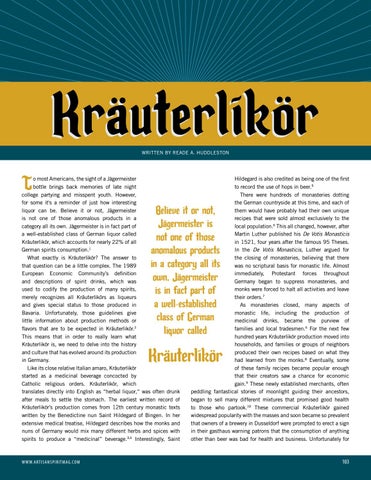 Kräuterlikör WRITTEN BY READE A. HUDDLESTON

o most Americans, the sight of a Jägermeister bottle brings back memories of late night college partying and misspent youth. However, for some it&#39;s a reminder of just how interesting liquor can be. Believe it or not, Jägermeister is not one of those anomalous products in a category all its own. Jägermeister is in fact part of a well-established class of German liquor called Kräuterlikör, which accounts for nearly 22% of all German spirits consumption.1 What exactly is Kräuterlikör? The answer to that question can be a little complex. The 1989 European Economic Community’s definition and descriptions of spirit drinks, which was used to codify the production of many spirits, merely recognizes all Kräuterlikörs as liqueurs and gives special status to those produced in Bavaria. Unfortunately, those guidelines give little information about production methods or flavors that are to be expected in Kräuterlikör.2 This means that in order to really learn what Kräuterlikör is, we need to delve into the history and culture that has evolved around its production in Germany. Like its close relative Italian amaro, Kräuterlikör started as a medicinal beverage concocted by Catholic religious orders. Kräuterlikör, which translates directly into English as “herbal liquor,“ was often drunk after meals to settle the stomach. The earliest written record of Kräuterlikör’s production comes from 12th century monastic texts written by the Benedictine nun Saint Hildegard of Bingen. In her extensive medical treatise, Hildegard describes how the monks and nuns of Germany would mix many different herbs and spices with spirits to produce a “medicinal” beverage.3,6 Interestingly, Saint

Hildegard is also credited as being one of the first to record the use of hops in beer.5 There were hundreds of monasteries dotting the German countryside at this time, and each of them would have probably had their own unique recipes that were sold almost exclusively to the local population.6 This all changed, however, after Martin Luther published his De Votis Monasticis in 1521, four years after the famous 95 Theses. In the De Votis Monasticis, Luther argued for the closing of monasteries, believing that there was no scriptural basis for monastic life. Almost immediately, Protestant forces throughout Germany began to suppress monasteries, and monks were forced to halt all activities and leave their orders.7 As monasteries closed, many aspects of monastic life, including the production of medicinal drinks, became the purview of families and local tradesmen.6 For the next few hundred years Kräuterlikör production moved into households, and families or groups of neighbors produced their own recipes based on what they had learned from the monks.8 Eventually, some of these family recipes became popular enough that their creators saw a chance for economic gain.9 These newly established merchants, often peddling fantastical stories of moonlight guiding their ancestors, began to sell many different mixtures that promised good health to those who partook.10 These commercial Kräuterlikör gained widespread popularity with the masses and soon became so prevalent that owners of a brewery in Dusseldorf were prompted to erect a sign in their gasthaus warning patrons that the consumption of anything other than beer was bad for health and business. Unfortunately for

Believe it or not, Jägermeister is not one of those anomalous products in a category all its own. Jägermeister is in fact part of a well-established class of German liquor called