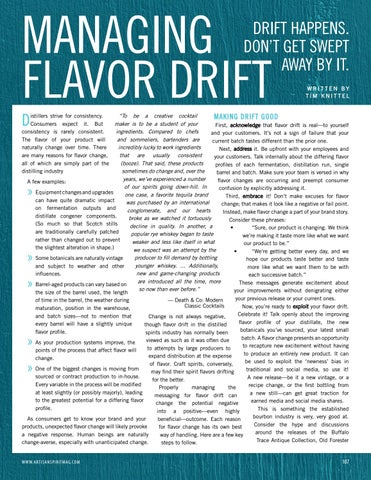 DRIFT HAPPENS. DON’T GET SWEPT AWAY BY IT. WRITTEN BY TIM KNITTEL

“To be a creative cocktail MA K ING DRIFT GOOD maker is to be a student of your First, acknowledge that flavor drift is real—to yourself ingredients. Compared to chefs and your customers. It’s not a sign of failure that your and sommeliers, bartenders are current batch tastes different than the prior one. incredibly lucky to work ingredients Next, address it. Be upfront with your employees and that are usually consistent your customers. Talk internally about the differing flavor (booze). That said, these products profiles of each fermentation, distillation run, single sometimes do change and, over the barrel and batch. Make sure your team is versed in why years, we’ve experienced a number flavor changes are occurring and preempt consumer A few examples: of our spirits going down-hill. In confusion by explicitly addressing it. Equipment changes and upgrades one case, a favorite tequila brand Third, embrace it! Don’t make excuses for flavor can have quite dramatic impact was purchased by an international change; that makes it look like a negative or fail point. on fermentation outputs and conglomerate, and our hearts Instead, make flavor change a part of your brand story. distillate congener components. broke as we watched it tortuously Consider these phrases: (So much so that Scotch stills decline in quality. In another, a • “Sure, our product is changing. We think are traditionally carefully patched popular rye whiskey began to taste we’re making it taste more like what we want rather than changed out to prevent weaker and less like itself in what our product to be.” the slightest alteration in shape.) we suspect was an attempt by the • “We’re getting better every day, and we producer to fill demand by bottling Some botanicals are naturally vintage hope our products taste better and taste younger whiskey. … Additionally, and subject to weather and other more like what we want them to be with new and game-changing products influences. each successive batch.” are introduced all the time, more These messages generate excitement about Barrel-aged products can vary based on so now than ever before.” your improvements without denigrating either the size of the barrel used, the length your previous release or your current ones. — Death & Co: Modern of time in the barrel, the weather during Classic Cocktails Now, you’re ready to exploit your flavor drift. maturation, position in the warehouse, Celebrate it! Talk openly about the improving and batch sizes—not to mention that Change is not always negative, flavor profile of your distillate, the new every barrel will have a slightly unique though flavor drift in the distilled botanicals you’ve sourced, your latest small flavor profile. spirits industry has normally been batch. A flavor change presents an opportunity viewed as such as it was often due As your production systems improve, the to recapture new excitement without having to attempts by large producers to points of the process that affect flavor will to produce an entirely new product. It can expand distribution at the expense change. be used to exploit the ‘newness’ bias in of flavor. Craft spirits, conversely, One of the biggest changes is moving from traditional and social media, so use it! may find their spirit flavors drifting sourced or contract production to in-house. A new release—be it a new vintage, or a for the better. Every variable in the process will be modified recipe change, or the first bottling from Properly managing the at least slightly (or possibly majorly), leading a new still—can get great traction for messaging for flavor drift can to the greatest potential for a differing flavor earned media and social media shares. change the potential negative profile. This is something the established into a positive—even highly bourbon industry is very, very good at. As consumers get to know your brand and your beneficial—outcome. Each reason Consider the hype and discussions products, unexpected flavor change will likely provoke for flavor change has its own best around the releases of the Buffalo a negative response. Human beings are naturally way of handling. Here are a few key Trace Antique Collection, Old Forester change-averse, especially with unanticipated change. steps to follow. istillers strive for consistency. Consumers expect it. But consistency is rarely consistent. The flavor of your product will naturally change over time. There are many reasons for flavor change, all of which are simply part of the distilling industry