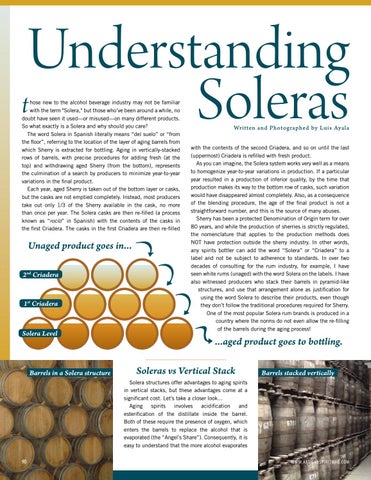 hose new to the alcohol beverage industry may not be familiar with the term "Solera," but those who’ve been around a while, no doubt have seen it used—or misused—on many different products. So what exactly is a Solera and why should you care? The word Solera in Spanish literally means “del suelo” or “from the floor”, referring to the location of the layer of aging barrels from which Sherry is extracted for bottling. Aging in vertically-stacked rows of barrels, with precise procedures for adding fresh (at the top) and withdrawing aged Sherry (from the bottom), represents the culmination of a search by producers to minimize year-to-year variations in the final product. Each year, aged Sherry is taken out of the bottom layer or casks, but the casks are not emptied completely. Instead, most producers take out only 1/3 of the Sherry available in the cask, no more than once per year. The Solera casks are then re-filled (a process known as “rocío” in Spanish) with the contents of the casks in the first Criadera. The casks in the first Criadera are then re-filled

Barrels in a Solera structure

Written and Photographed by Luis Ayala

with the contents of the second Criadera, and so on until the last (uppermost) Criadera is refilled with fresh product. As you can imagine, the Solera system works very well as a means to homogenize year-to-year variations in production. If a particular year resulted in a production of inferior quality, by the time that production makes its way to the bottom row of casks, such variation would have disappeared almost completely. Also, as a consequence of the blending procedure, the age of the final product is not a straightforward number, and this is the source of many abuses. Sherry has been a protected Denomination of Origin term for over 80 years, and while the production of sherries is strictly regulated, the nomenclature that applies to the production methods does NOT have protection outside the sherry industry. In other words, any spirits bottler can add the word “Solera” or “Criadera” to a label and not be subject to adherence to standards. In over two decades of consulting for the rum industry, for example, I have seen white rums (unaged) with the word Solera on the labels. I have also witnessed producers who stack their barrels in pyramid-like structures, and use that arrangement alone as justification for using the word Solera to describe their products, even though they don’t follow the traditional procedures required for Sherry. One of the most popular Solera rum brands is produced in a country where the norms do not even allow the re-filling of the barrels during the aging process!

Solera structures offer advantages to aging spirits in vertical stacks, but these advantages come at a significant cost. Let’s take a closer look... Aging spirits involves acidification and esterification of the distillate inside the barrel. Both of these require the presence of oxygen, which enters the barrels to replace the alcohol that is evaporated (the “Angel’s Share”). Consequently, it is easy to understand that the more alcohol evaporates