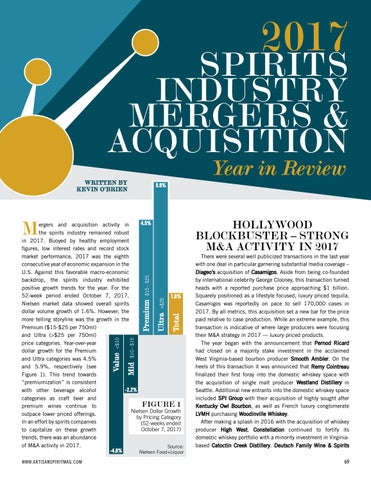 categories as craft beer and premium wines continue to outpace lower priced offerings. In an effort by spirits companies to capitalize on these growth trends, there was an abundance of M&A activity in 2017.

4.5% ergers and acquisition activity in the spirits industry remained robust in 2017. Buoyed by healthy employment figures, low interest rates and record stock market performance, 2017 was the eighth consecutive year of economic expansion in the U.S. Against this favorable macro-economic backdrop, the spirits industry exhibited positive growth trends for the year. For the 52-week period ended October 7, 2017, Nielsen market data showed overall spirits dollar volume growth of 1.6%. However, the more telling storyline was the growth in the Premium ($15-$25 per 750ml) and Ultra (>$25 per 750ml) price categories. Year-over-year dollar growth for the Premium and Ultra categories was 4.5% and 5.9%, respectively (see Figure 1). This trend towards “premiumization” is consistent -2.2% with other beverage alcohol

There were several well publicized transactions in the last year with one deal in particular garnering substantial media coverage – Diageo’s acquisition of Casamigos. Aside from being-4.8% co-founded by international celebrity George Clooney, this transaction turned heads with a3.3% reported purchase price approaching $1 billion. Squarely positioned as a lifestyle focused, luxury priced tequila, Casamigos was reportedly on pace to sell 170,000 cases in 2017. By all metrics, this acquisition set a new bar for the price -0.2%While an extreme example, this paid relative to case production. transaction is indicative of where large producers were focusing their M&A strategy in 2017 — luxury priced products. The year began with the announcement that Pernod Ricard had closed on a majority stake investment-3.6% in the acclaimed West Virginia-based bourbon producer Smooth Ambler. On the heels of this transaction it was announced that Remy Cointreau finalized their first foray into the domestic whiskey space with -7.7% the acquisition of single malt producer Westland Distillery in Seattle. Additional new entrants into the domestic whiskey space included SPI Group with their acquisition of highly sought after Kentucky Owl Bourbon, as well as French luxury conglomerate LVMH purchasing Woodinville Whiskey. After making a splash in 2016 with the acquisition of whiskey producer High West, Constellation continued to fortify its domestic whiskey portfolio with a minority investment in Virginiabased Catoctin Creek Distillery. Deutsch Family Wine & Spirits