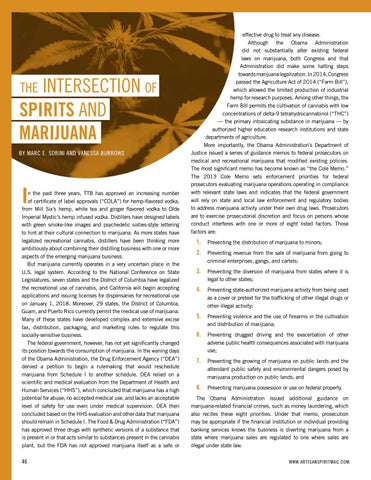 INTERSECTION of SPIRITS AND MARIJUANA the

n the past three years, TTB has approved an increasing number of certificate of label approvals (“COLA”) for hemp-flavored vodka, from Mill Six’s hemp, white tea and ginger flavored vodka to Olde Imperial Mystic’s hemp infused vodka. Distillers have designed labels with green smoke-like images and psychedelic sixties-style lettering to hint at their cultural connection to marijuana. As more states have legalized recreational cannabis, distillers have been thinking more ambitiously about combining their distilling business with one or more aspects of the emerging marijuana business. But marijuana currently operates in a very uncertain place in the U.S. legal system. According to the National Conference on State Legislatures, seven states and the District of Columbia have legalized the recreational use of cannabis, and California will begin accepting applications and issuing licenses for dispensaries for recreational use on January 1, 2018. Moreover, 29 states, the District of Columbia, Guam, and Puerto Rico currently permit the medical use of marijuana. Many of these states have developed complex and extensive excise tax, distribution, packaging, and marketing rules to regulate this socially-sensitive business. The federal government, however, has not yet significantly changed its position towards the consumption of marijuana. In the waning days of the Obama Administration, the Drug Enforcement Agency (“DEA”) denied a petition to begin a rulemaking that would reschedule marijuana from Schedule I to another schedule. DEA relied on a scientific and medical evaluation from the Department of Health and Human Services (“HHS”), which concluded that marijuana has a high potential for abuse, no accepted medical use, and lacks an acceptable level of safety for use even under medical supervision. DEA then concluded based on the HHS evaluation and other data that marijuana should remain in Schedule I. The Food &amp; Drug Administration (“FDA”) has approved three drugs with synthetic versions of a substance that is present in or that acts similar to substances present in the cannabis plant, but the FDA has not approved marijuana itself as a safe or

effective drug to treat any disease. Although the Obama Administration did not substantially alter existing federal laws on marijuana, both Congress and that Administration did make some halting steps towards marijuana legalization. In 2014, Congress passed the Agriculture Act of 2014 (“Farm Bill”), which allowed the limited production of industrial hemp for research purposes. Among other things, the Farm Bill permits the cultivation of cannabis with low concentrations of delta-9 tetrahydrocannabinol (“THC”) — the primary intoxicating substance in marijuana — by authorized higher education research institutions and state departments of agriculture. More importantly, the Obama Administration’s Department of Justice issued a series of guidance memos to federal prosecutors on medical and recreational marijuana that modified existing policies. The most significant memo has become known as “the Cole Memo.” The 2013 Cole Memo sets enforcement priorities for federal prosecutors evaluating marijuana operations operating in compliance with relevant state laws and indicates that the federal government will rely on state and local law enforcement and regulatory bodies to address marijuana activity under their own drug laws. Prosecutors are to exercise prosecutorial discretion and focus on persons whose conduct interferes with one or more of eight listed factors. Those factors are:

3. Preventing the diversion of marijuana from states where it is legal to other states;

4. Preventing state-authorized marijuana activity from being used as a cover or pretext for the trafficking of other illegal drugs or other illegal activity;

5. Preventing violence and the use of firearms in the cultivation and distribution of marijuana;

6. Preventing drugged driving and the exacerbation of other adverse public health consequences associated with marijuana use;

8. Preventing marijuana possession or use on federal property. The Obama Administration issued additional guidance on marijuana-related financial crimes, such as money laundering, which also recites these eight priorities. Under that memo, prosecution may be appropriate if the financial institution or individual providing banking services knows the business is diverting marijuana from a state where marijuana sales are regulated to one where sales are illegal under state law. WWW.ARTISANSPIRITMAG.COM