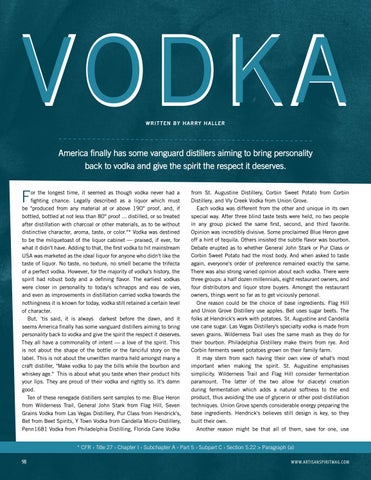 America finally has some vanguard distillers aiming to bring personality back to vodka and give the spirit the respect it deserves.

or the longest time, it seemed as though vodka never had a fighting chance. Legally described as a liquor which must be "produced from any material at or above 190° proof, and, if bottled, bottled at not less than 80° proof ... distilled, or so treated after distillation with charcoal or other materials, as to be without distinctive character, aroma, taste, or color."* Vodka was destined to be the milquetoast of the liquor cabinet — praised, if ever, for what it didn't have. Adding to that, the first vodka to hit mainstream USA was marketed as the ideal liquor for anyone who didn't like the taste of liquor. No taste, no texture, no smell became the trifecta of a perfect vodka. However, for the majority of vodka's history, the spirit had robust body and a defining flavor. The earliest vodkas were closer in personality to today's schnapps and eau de vies, and even as improvements in distillation carried vodka towards the nothingness it is known for today, vodka still retained a certain level of character. But, ‘tis said, it is always darkest before the dawn, and it seems America finally has some vanguard distillers aiming to bring personality back to vodka and give the spirit the respect it deserves. They all have a commonality of intent — a love of the spirit. This is not about the shape of the bottle or the fanciful story on the label. This is not about the unwritten mantra held amongst many a craft distiller, "Make vodka to pay the bills while the bourbon and whiskey age." This is about what you taste when their product hits your lips. They are proud of their vodka and rightly so. It's damn good. Ten of these renegade distillers sent samples to me: Blue Heron from Wilderness Trail, General John Stark from Flag Hill, Seven Grains Vodka from Las Vegas Distillery, Pur Class from Hendrick's, Bet from Beet Spirits, Y Town Vodka from Candella Micro-Distillery, Penn1681 Vodka from Philadelphia Distilling, Florida Cane Vodka

from St. Augustine Distillery, Corbin Sweet Potato from Corbin Distillery, and Vly Creek Vodka from Union Grove. Each vodka was different from the other and unique in its own special way. After three blind taste tests were held, no two people in any group picked the same first, second, and third favorite. Opinion was incredibly divisive. Some proclaimed Blue Heron gave off a hint of tequila. Others insisted the subtle flavor was bourbon. Debate erupted as to whether General John Stark or Pur Class or Corbin Sweet Potato had the most body. And when asked to taste again, everyone's order of preference remained exactly the same. There was also strong varied opinion about each vodka. There were three groups: a half dozen millennials, eight restaurant owners, and four distributors and liquor store buyers. Amongst the restaurant owners, things went so far as to get viciously personal. One reason could be the choice of base ingredients. Flag Hill and Union Grove Distillery use apples. Bet uses sugar beets. The folks at Hendrick's work with potatoes. St. Augustine and Candella use cane sugar. Las Vegas Distillery's specialty vodka is made from seven grains. Wilderness Trail uses the same mash as they do for their bourbon. Philadelphia Distillery make theirs from rye. And Corbin ferments sweet potatoes grown on their family farm. It may stem from each having their own view of what's most important when making the spirit. St. Augustine emphasises simplicity. Wilderness Trail and Flag Hill consider fermentation paramount. The latter of the two allow for diacetyl creation during fermentation which adds a natural softness to the end product, thus avoiding the use of glycerin or other post-distillation techniques. Union Grove spends considerable energy preparing the base ingredients. Hendrick's believes still design is key, so they built their own. Another reason might be that all of them, save for one, use