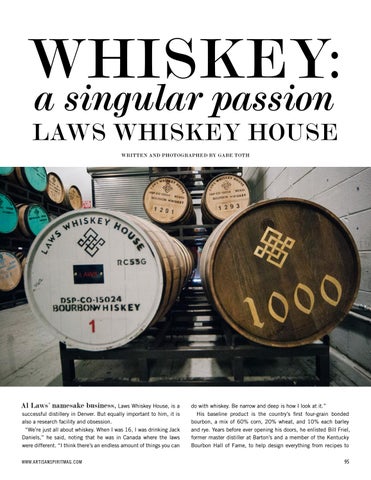 Al Laws’ namesake business, Laws Whiskey House, is a successful distillery in Denver. But equally important to him, it is also a research facility and obsession. “We’re just all about whiskey. When I was 16, I was drinking Jack Daniels,” he said, noting that he was in Canada where the laws were different. “I think there’s an endless amount of things you can WWW.ARTISANSPIRITMAG.COM

do with whiskey. Be narrow and deep is how I look at it.” His baseline product is the country’s first four-grain bonded bourbon, a mix of 60% corn, 20% wheat, and 10% each barley and rye. Years before ever opening his doors, he enlisted Bill Friel, former master distiller at Barton’s and a member of the Kentucky Bourbon Hall of Fame, to help design everything from recipes to