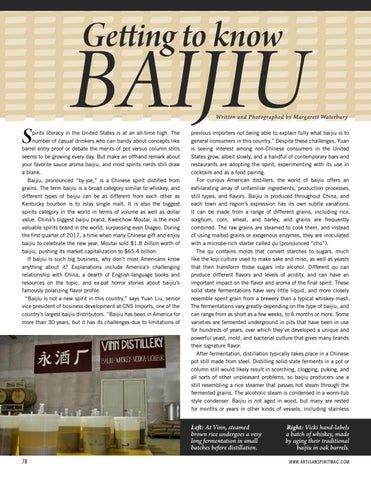 Written and Photographed by Margarett Waterbury

pirits literacy in the United States is at an all-time high. The number of casual drinkers who can bandy about concepts like barrel entry proof or debate the merits of pot versus column stills seems to be growing every day. But make an offhand remark about your favorite sauce aroma baijiu, and most spirits nerds still draw a blank. Baijiu, pronounced “by-joe,” is a Chinese spirit distilled from grains. The term baijiu is a broad category similar to whiskey, and different types of baijiu can be as different from each other as Kentucky bourbon is to Islay single malt. It is also the biggest spirits category in the world in terms of volume as well as dollar value. China’s biggest baijiu brand, Kweichow Moutai, is the most valuable spirits brand in the world, surpassing even Diageo. During the first quarter of 2017, a time when many Chinese gift and enjoy baijiu to celebrate the new year, Moutai sold $1.8 billion worth of baijiu, pushing its market capitalization to $65.4 billion. If baijiu is such big business, why don’t most Americans know anything about it? Explanations include America’s challenging relationship with China, a dearth of English-language books and resources on the topic, and ex-pat horror stories about baijiu’s famously polarizing flavor profile. “Baijiu is not a new spirit in this country,” says Yuan Liu, senior vice president of business development at CNS Imports, one of the country’s largest baijiu distributors. “Baijiu has been in America for more than 30 years, but it has its challenges due to limitations of

previous importers not being able to explain fully what baijiu is to general consumers in this country.” Despite these challenges, Yuan is seeing interest among non-Chinese consumers in the United States grow, albeit slowly, and a handful of contemporary bars and restaurants are adopting the spirit, experimenting with its use in cocktails and as a food pairing. For curious American distillers, the world of baijiu offers an exhilarating array of unfamiliar ingredients, production processes, still types, and flavors. Baijiu is produced throughout China, and each town and region’s expression has its own subtle variations. It can be made from a range of different grains, including rice, sorghum, corn, wheat, and barley, and grains are frequently combined. The raw grains are steamed to cook them, and instead of using malted grains or exogenous enzymes, they are inoculated with a microbe-rich starter called qu (pronounced “chu”). The qu contains molds that convert starches to sugars, much like the koji culture used to make sake and miso, as well as yeasts that then transform those sugars into alcohol. Different qu can produce different flavors and levels of acidity, and can have an important impact on the flavor and aroma of the final spirit. These solid state fermentations have very little liquid, and more closely resemble spent grain from a brewery than a typical whiskey mash. The fermentations vary greatly depending on the type of baijiu, and can range from as short as a few weeks, to 6 months or more. Some varieties are fermented underground in pits that have been in use for hundreds of years, over which they’ve developed a unique and powerful yeast, mold, and bacterial culture that gives many brands their signature flavor. After fermentation, distillation typically takes place in a Chinese pot still made from steel. Distilling solid-state ferments in a pot or column still would likely result in scorching, clogging, puking, and all sorts of other unpleasant problems, so baijiu producers use a still resembling a rice steamer that passes hot steam through the fermented grains. The alcoholic steam is condensed in a worm-tub style condenser. Baijiu is not aged in wood, but many are rested for months or years in other kinds of vessels, including stainless

Right: Vicki hand-labels a batch of whiskey, made by aging their traditional baijiu in oak barrels. WWW.ARTISANSPIRITMAG.COM