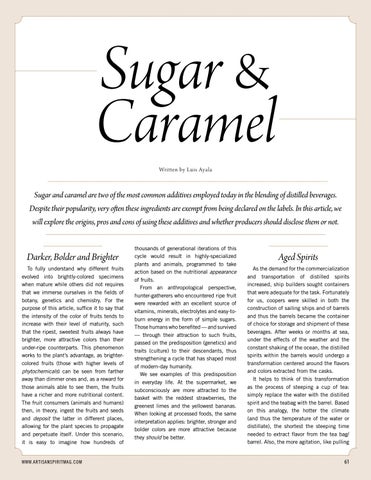 Sugar and caramel are two of the most common additives employed today in the blending of distilled beverages. Despite their popularity, very often these ingredients are exempt from being declared on the labels. In this article, we will explore the origins, pros and cons of using these additives and whether producers should disclose them or not.

Darker, Bolder and Brighter To fully understand why different fruits evolved into brightly-colored specimens when mature while others did not requires that we immerse ourselves in the fields of botany, genetics and chemistry. For the purpose of this article, suffice it to say that the intensity of the color of fruits tends to increase with their level of maturity, such that the ripest, sweetest fruits always have brighter, more attractive colors than their under-ripe counterparts. This phenomenon works to the plant’s advantage, as brightercolored fruits (those with higher levels of phytochemicals) can be seen from farther away than dimmer ones and, as a reward for those animals able to see them, the fruits have a richer and more nutritional content. The fruit consumers (animals and humans) then, in theory, ingest the fruits and seeds and deposit the latter in different places, allowing for the plant species to propagate and perpetuate itself. Under this scenario, it is easy to imagine how hundreds of WWW.ARTISANSPIRITMAG.COM

thousands of generational iterations of this cycle would result in highly-specialized plants and animals, programmed to take action based on the nutritional appearance of fruits. From an anthropological perspective, hunter-gatherers who encountered ripe fruit were rewarded with an excellent source of vitamins, minerals, electrolytes and easy-toburn energy in the form of simple sugars. Those humans who benefited — and survived — through their attraction to such fruits, passed on the predisposition (genetics) and traits (culture) to their descendants, thus strengthening a cycle that has shaped most of modern-day humanity. We see examples of this predisposition in everyday life. At the supermarket, we subconsciously are more attracted to the basket with the reddest strawberries, the greenest limes and the yellowest bananas. When looking at processed foods, the same interpretation applies: brighter, stronger and bolder colors are more attractive because they should be better.

Aged Spirits As the demand for the commercialization and transportation of distilled spirits increased, ship builders sought containers that were adequate for the task. Fortunately for us, coopers were skilled in both the construction of sailing ships and of barrels and thus the barrels became the container of choice for storage and shipment of these beverages. After weeks or months at sea, under the effects of the weather and the constant shaking of the ocean, the distilled spirits within the barrels would undergo a transformation centered around the flavors and colors extracted from the casks. It helps to think of this transformation as the process of steeping a cup of tea: simply replace the water with the distilled spirit and the teabag with the barrel. Based on this analogy, the hotter the climate (and thus the temperature of the water or distillate), the shortest the steeping time needed to extract flavor from the tea bag/ barrel. Also, the more agitation, like pulling