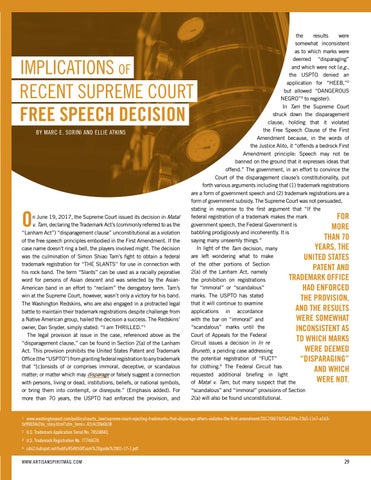 The Trademark Act’s “disparagement clause” has been declared unconstitutional

the results were somewhat inconsistent as to which marks were deemed “disparaging” and which were not (e.g., the USPTO denied an application for “HEEB,”2 but allowed “DANGEROUS NEGRO”3 to register). In Tam the Supreme Court struck down the disparagement clause, holding that it violated the Free Speech Clause of the First Amendment because, in the words of the Justice Alito, it “offends a bedrock First Amendment principle: Speech may not be banned on the ground that it expresses ideas that offend.” The government, in an effort to convince the Court of the disparagement clause’s constitutionality, put forth various arguments including that (1) trademark registrations are a form of government speech and (2) trademark registrations are a form of government subsidy. The Supreme Court was not persuaded, stating in response to the first argument that “If the federal registration of a trademark makes the mark FOR government speech, the Federal Government is MORE babbling prodigiously and incoherently. It is THAN 70 saying many unseemly things.” YEARS, THE In light of the Tam decision, many are left wondering what to make UNITED STATES of the other portions of Section PATENT AND 2(a) of the Lanham Act, namely TRADEMARK OFFICE the prohibition on registrations for “immoral” or “scandalous” HAD ENFORCED marks. The USPTO has stated THE PROVISION, that it will continue to examine AND THE RESULTS applications in accordance WERE SOMEWHAT with the bar on “immoral” and “scandalous” marks until the INCONSISTENT AS Court of Appeals for the Federal TO WHICH MARKS Circuit issues a decision in In re WERE DEEMED Brunetti, a pending case addressing the potential registration of “FUCT” “DISPARAGING” for clothing.4 The Federal Circuit has AND WHICH requested additional briefing in light WERE NOT. of Matal v. Tam, but many suspect that the “scandalous” and “immoral” provisions of Section 2(a) will also be found unconstitutional.

n June 19, 2017, the Supreme Court issued its decision in Matal v. Tam, declaring the Trademark Act’s (commonly referred to as the “Lanham Act”) “disparagement clause” unconstitutional as a violation of the free speech principles embodied in the First Amendment. If the case name doesn’t ring a bell, the players involved might. The decision was the culmination of Simon Shiao Tam’s fight to obtain a federal trademark registration for “THE SLANTS” for use in connection with his rock band. The term “Slants” can be used as a racially pejorative word for persons of Asian descent and was selected by the AsianAmerican band in an effort to “reclaim” the derogatory term. Tam’s win at the Supreme Court, however, wasn’t only a victory for his band. The Washington Redskins, who are also engaged in a protracted legal battle to maintain their trademark registrations despite challenge from a Native American group, hailed the decision a success. The Redskins’ owner, Dan Snyder, simply stated: “I am THRILLED.”1 The legal provision at issue in the case, referenced above as the “disparagement clause,” can be found in Section 2(a) of the Lanham Act. This provision prohibits the United States Patent and Trademark Office (the “USPTO”) from granting federal registration to any trademark that “[c]onsists of or comprises immoral, deceptive, or scandalous matter; or matter which may disparage or falsely suggest a connection with persons, living or dead, institutions, beliefs, or national symbols, or bring them into contempt, or disrepute.” (Emphasis added). For more than 70 years, the USPTO had enforced the provision, and