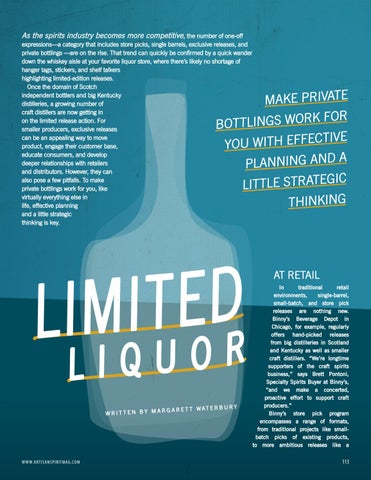 As the spirits industry becomes more competitive, the number of one-off expressions—a category that includes store picks, single barrels, exclusive releases, and private bottlings —are on the rise. That trend can quickly be confirmed by a quick wander down the whiskey aisle at your favorite liquor store, where there’s likely no shortage of hanger tags, stickers, and shelf talkers highlighting limited-edition releases. Once the domain of Scotch independent bottlers and big Kentucky distilleries, a growing number of craft distillers are now getting in on the limited release action. For smaller producers, exclusive releases can be an appealing way to move product, engage their customer base, educate consumers, and develop deeper relationships with retailers and distributors. However, they can also pose a few pitfalls. To make private bottlings work for you, like virtually everything else in life, effective planning and a little strategic thinking is key.

AT RETAIL In traditional retail environments, single-barrel, small-batch, and store pick releases are nothing new. Binny’s Beverage Depot in Chicago, for example, regularly offers hand-picked releases from big distilleries in Scotland and Kentucky as well as smaller craft distillers. “We’re longtime supporters of the craft spirits business,” says Brett Pontoni, Specialty Spirits Buyer at Binny’s, “and we make a concerted, proactive effort to support craft producers.” Binny’s store pick program encompasses a range of formats, from traditional projects like smallbatch picks of existing products, to more ambitious releases like a