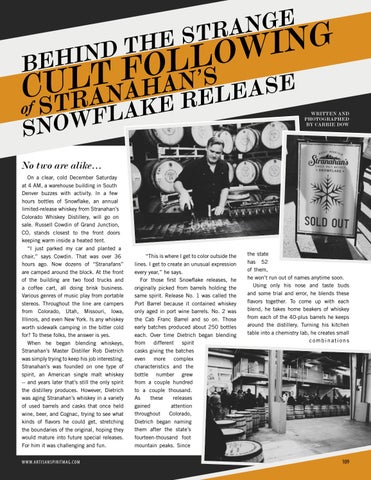 WRITTEN AND PHOTOGRAPHED BY CARRIE DOW

No two are alike… On a clear, cold December Saturday at 4 AM, a warehouse building in South Denver buzzes with activity. In a few hours bottles of Snowflake, an annual limited-release whiskey from Stranahan’s Colorado Whiskey Distillery, will go on sale. Russell Cowdin of Grand Junction, CO, stands closest to the front doors keeping warm inside a heated tent. “I just parked my car and planted a chair,” says Cowdin. That was over 36 hours ago. Now dozens of “Stranafans” are camped around the block. At the front of the building are two food trucks and a coffee cart, all doing brisk business. Various genres of music play from portable stereos. Throughout the line are campers from Colorado, Utah, Missouri, Iowa, Illinois, and even New York. Is any whiskey worth sidewalk camping in the bitter cold for? To these folks, the answer is yes. When he began blending whiskeys, Stranahan’s Master Distiller Rob Dietrich was simply trying to keep his job interesting. Stranahan’s was founded on one type of spirit, an American single malt whiskey -- and years later that’s still the only spirit the distillery produces. However, Dietrich was aging Stranahan’s whiskey in a variety of used barrels and casks that once held wine, beer, and Cognac, trying to see what kinds of flavors he could get, stretching the boundaries of the original, hoping they would mature into future special releases. For him it was challenging and fun. WWW.ART ISANSP IRITMAG.COM

“This is where I get to color outside the lines. I get to create an unusual expression every year,” he says. For those first Snowflake releases, he originally picked from barrels holding the same spirit. Release No. 1 was called the Port Barrel because it contained whiskey only aged in port wine barrels. No. 2 was the Cab Franc Barrel and so on. Those early batches produced about 250 bottles each. Over time Dietrich began blending from different spirit casks giving the batches even more complex characteristics and the bottle number grew from a couple hundred to a couple thousand. As these releases gained attention throughout Colorado, Dietrich began naming them after the state’s fourteen-thousand foot mountain peaks. Since

the state has 52 of them, he won’t run out of names anytime soon. Using only his nose and taste buds and some trial and error, he blends these flavors together. To come up with each blend, he takes home beakers of whiskey from each of the 40-plus barrels he keeps around the distillery. Turning his kitchen table into a chemistry lab, he creates small combinations