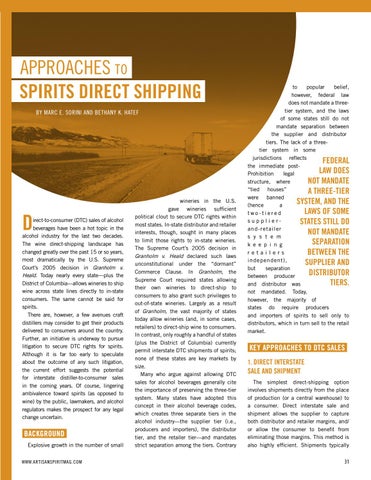 irect-to-consumer (DTC) sales of alcohol beverages have been a hot topic in the alcohol industry for the last two decades. The wine direct-shipping landscape has changed greatly over the past 15 or so years, most dramatically by the U.S. Supreme Court’s 2005 decision in Granholm v. Heald. Today nearly every state—plus the District of Columbia—allows wineries to ship wine across state lines directly to in-state consumers. The same cannot be said for spirits. There are, however, a few avenues craft distillers may consider to get their products delivered to consumers around the country. Further, an initiative is underway to pursue litigation to secure DTC rights for spirits. Although it is far too early to speculate about the outcome of any such litigation, the current effort suggests the potential for interstate distiller-to-consumer sales in the coming years. Of course, lingering ambivalence toward spirits (as opposed to wine) by the public, lawmakers, and alcohol regulators makes the prospect for any legal change uncertain.

BACKGROUND Explosive growth in the number of small WWW.ARTISANSPIRITMAG.COM

wineries in the U.S. gave wineries sufficient political clout to secure DTC rights within most states. In-state distributor and retailer interests, though, sought in many places to limit those rights to in-state wineries. The Supreme Court’s 2005 decision in Granholm v. Heald declared such laws unconstitutional under the “dormant” Commerce Clause. In Granholm, the Supreme Court required states allowing their own wineries to direct-ship to consumers to also grant such privileges to out-of-state wineries. Largely as a result of Granholm, the vast majority of states today allow wineries (and, in some cases, retailers) to direct-ship wine to consumers. In contrast, only roughly a handful of states (plus the District of Columbia) currently permit interstate DTC shipments of spirits; none of these states are key markets by size. Many who argue against allowing DTC sales for alcohol beverages generally cite the importance of preserving the three-tier system. Many states have adopted this concept in their alcohol beverage codes, which creates three separate tiers in the alcohol industry—the supplier tier (i.e., producers and importers), the distributor tier, and the retailer tier—and mandates strict separation among the tiers. Contrary

to popular belief, however, federal law does not mandate a threetier system, and the laws of some states still do not mandate separation between the supplier and distributor tiers. The lack of a threetier system in some jurisdictions reflects FEDERAL the immediate postLAW DOES Prohibition legal structure, where NOT MANDATE “tied houses” A THREE-TIER were banned SYSTEM, AND THE (hence a LAWS OF SOME two-tiered supplierSTATES STILL DO and-retailer NOT MANDATE s y s t e m SEPARATION k e e p i n g retailers BETWEEN THE independent), SUPPLIER AND but separation DISTRIBUTOR between producer TIERS. and distributor was not mandated. Today, however, the majority of states do require producers and importers of spirits to sell only to distributors, which in turn sell to the retail market.

KEY APPROACHES TO DTC SALES 1. DIRECT INTERSTATE SALE AND SHIPMENT The simplest direct-shipping option involves shipments directly from the place of production (or a central warehouse) to a consumer. Direct interstate sale and shipment allows the supplier to capture both distributor and retailer margins, and/ or allow the consumer to benefit from eliminating those margins. This method is also highly efficient. Shipments typically