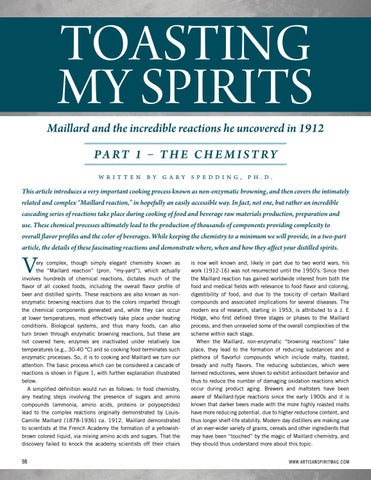 This article introduces a very important cooking process known as non-enzymatic browning, and then covers the intimately related and complex “Maillard reaction,” in hopefully an easily accessible way. In fact, not one, but rather an incredible cascading series of reactions take place during cooking of food and beverage raw materials production, preparation and use. These chemical processes ultimately lead to the production of thousands of components providing complexity to overall flavor profiles and the color of beverages. While keeping the chemistry to a minimum we will provide, in a two-part article, the details of these fascinating reactions and demonstrate where, when and how they affect your distilled spirits.

ery complex, though simply elegant chemistry known as the “Maillard reaction” (pron. “my-yard”), which actually involves hundreds of chemical reactions, dictates much of the flavor of all cooked foods, including the overall flavor profile of beer and distilled spirits. These reactions are also known as nonenzymatic browning reactions due to the colors imparted through the chemical components generated and, while they can occur at lower temperatures, most effectively take place under heating conditions. Biological systems, and thus many foods, can also turn brown through enzymatic browning reactions, but these are not covered here; enzymes are inactivated under relatively low temperatures (e.g., 30-40 °C) and so cooking food terminates such enzymatic processes. So, it is to cooking and Maillard we turn our attention. The basic process which can be considered a cascade of reactions is shown in Figure 1, with further explanation illustrated below. A simplified definition would run as follows: In food chemistry, any heating steps involving the presence of sugars and amino compounds (ammonia, amino acids, proteins or polypeptides) lead to the complex reactions originally demonstrated by LouisCamille Maillard (1878-1936) ca. 1912. Maillard demonstrated to scientists at the French Academy the formation of a yellowishbrown colored liquid, via mixing amino acids and sugars. That the discovery failed to knock the academy scientists off their chairs

is now well known and, likely in part due to two world wars, his work (1912-16) was not resurrected until the 1950’s. Since then the Maillard reaction has gained worldwide interest from both the food and medical fields with relevance to food flavor and coloring, digestibility of food, and due to the toxicity of certain Maillard compounds and associated implications for several diseases. The modern era of research, starting in 1953, is attributed to a J. E Hodge, who first defined three stages or phases to the Maillard process, and then unraveled some of the overall complexities of the scheme within each stage. When the Maillard, non-enzymatic “browning reactions” take place, they lead to the formation of reducing substances and a plethora of flavorful compounds which include malty, toasted, bready and nutty flavors. The reducing substances, which were termed reductones, were shown to exhibit antioxidant behavior and thus to reduce the number of damaging oxidation reactions which occur during product aging. Brewers and maltsters have been aware of Maillard-type reactions since the early 1900s and it is known that darker beers made with the more highly roasted malts have more reducing potential, due to higher reductone content, and thus longer shelf-life stability. Modern day distillers are making use of an ever-wider variety of grains, cereals and other ingredients that may have been “touched” by the magic of Maillard chemistry, and they should thus understand more about this topic. WWW.ARTISANSPIRITMAG.COM