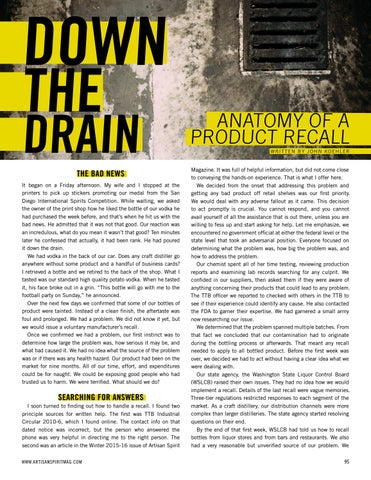 DRAIN THE BAD NEWS It began on a Friday afternoon. My wife and I stopped at the printers to pick up stickers promoting our medal from the San Diego International Spirits Competition. While waiting, we asked the owner of the print shop how he liked the bottle of our vodka he had purchased the week before, and that’s when he hit us with the bad news. He admitted that it was not that good. Our reaction was an incredulous, what do you mean it wasn’t that good? Ten minutes later he confessed that actually, it had been rank. He had poured it down the drain. We had vodka in the back of our car. Does any craft distiller go anywhere without some product and a handful of business cards? I retrieved a bottle and we retired to the back of the shop. What I tasted was our standard high quality potato vodka. When he tasted it, his face broke out in a grin. “This bottle will go with me to the football party on Sunday,” he announced. Over the next few days we confirmed that some of our bottles of product were tainted. Instead of a clean finish, the aftertaste was foul and prolonged. We had a problem. We did not know it yet, but we would issue a voluntary manufacturer’s recall. Once we confirmed we had a problem, our first instinct was to determine how large the problem was, how serious it may be, and what had caused it. We had no idea what the source of the problem was or if there was any health hazard. Our product had been on the market for nine months. All of our time, effort, and expenditures could be for naught. We could be exposing good people who had trusted us to harm. We were terrified. What should we do?

SEARCHING FOR ANSWERS I soon turned to finding out how to handle a recall. I found two principle sources for written help. The first was TTB Industrial Circular 2010-6, which I found online. The contact info on that dated notice was incorrect, but the person who answered the phone was very helpful in directing me to the right person. The second was an article in the Winter 2015-16 issue of Artisan Spirit WWW.ARTISANSPIRITMAG.COM

ANATOMY OF A PRODUCT RECALL WRITTEN BY JOHN KOEHLER

Magazine. It was full of helpful information, but did not come close to conveying the hands-on experience. That is what I offer here. We decided from the onset that addressing this problem and getting any bad product off retail shelves was our first priority. We would deal with any adverse fallout as it came. This decision to act promptly is crucial. You cannot respond, and you cannot avail yourself of all the assistance that is out there, unless you are willing to fess up and start asking for help. Let me emphasize, we encountered no government official at either the federal level or the state level that took an adversarial position. Everyone focused on determining what the problem was, how big the problem was, and how to address the problem. Our chemist spent all of her time testing, reviewing production reports and examining lab records searching for any culprit. We confided in our suppliers, then asked them if they were aware of anything concerning their products that could lead to any problem. The TTB officer we reported to checked with others in the TTB to see if their experience could identify any cause. He also contacted the FDA to garner their expertise. We had garnered a small army now researching our issue. We determined that the problem spanned multiple batches. From that fact we concluded that our contamination had to originate during the bottling process or afterwards. That meant any recall needed to apply to all bottled product. Before the first week was over, we decided we had to act without having a clear idea what we were dealing with. Our state agency, the Washington State Liquor Control Board (WSLCB) raised their own issues. They had no idea how we would implement a recall. Details of the last recall were vague memories. Three-tier regulations restricted responses to each segment of the market. As a craft distillery, our distribution channels were more complex than larger distilleries. The state agency started resolving questions on their end. By the end of that first week, WSLCB had told us how to recall bottles from liquor stores and from bars and restaurants. We also had a very reasonable but unverified source of our problem. We