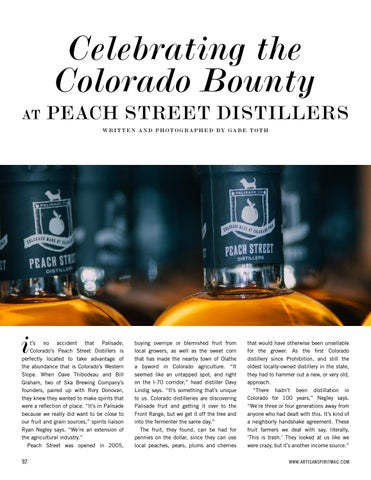 Celebrating the Colorado Bounty at

t’s no accident that Palisade, Colorado’s Peach Street Distillers is perfectly located to take advantage of the abundance that is Colorado’s Western Slope. When Dave Thibodeau and Bill Graham, two of Ska Brewing Company’s founders, paired up with Rory Donovan, they knew they wanted to make spirits that were a reflection of place. “It’s in Palisade because we really did want to be close to our fruit and grain sources,” spirits liaison Ryan Negley says. “We’re an extension of the agricultural industry.” Peach Street was opened in 2005,

buying overripe or blemished fruit from local growers, as well as the sweet corn that has made the nearby town of Olathe a byword in Colorado agriculture. “It seemed like an untapped spot, and right on the I-70 corridor,” head distiller Davy Lindig says. “It’s something that’s unique to us. Colorado distilleries are discovering Palisade fruit and getting it over to the Front Range, but we get it off the tree and into the fermenter the same day.” The fruit, they found, can be had for pennies on the dollar, since they can use local peaches, pears, plums and cherries

that would have otherwise been unsellable for the grower. As the first Colorado distillery since Prohibition, and still the oldest locally-owned distillery in the state, they had to hammer out a new, or very old, approach. “There hadn’t been distillation in Colorado for 100 years,” Negley says. “We’re three or four generations away from anyone who had dealt with this. It’s kind of a neighborly handshake agreement. These fruit farmers we deal with say, literally, ‘This is trash.’ They looked at us like we were crazy, but it’s another income source.” WWW.ARTISANSPIRITMAG.COM