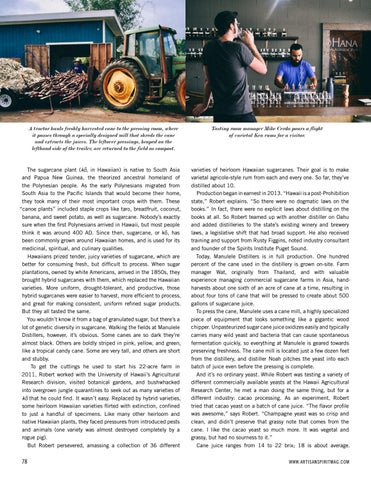 A tractor hauls freshly harvested cane to the pressing room, where it passes through a specially designed mill that shreds the cane and extracts the juices. The leftover pressings, heaped on the lefthand side of the trailer, are returned to the field as compost.

The sugarcane plant (ko, in Hawaiian) is native to South Asia and Papua New Guinea, the theorized ancestral homeland of the Polynesian people. As the early Polynesians migrated from South Asia to the Pacific Islands that would become their home, they took many of their most important crops with them. These “canoe plants” included staple crops like taro, breadfruit, coconut, banana, and sweet potato, as well as sugarcane. Nobody’s exactly sure when the first Polynesians arrived in Hawaii, but most people think it was around 400 AD. Since then, sugarcane, or ko, has been commonly grown around Hawaiian homes, and is used for its medicinal, spiritual, and culinary qualities. Hawaiians prized tender, juicy varieties of sugarcane, which are better for consuming fresh, but difficult to process. When sugar plantations, owned by white Americans, arrived in the 1850s, they brought hybrid sugarcanes with them, which replaced the Hawaiian varieties. More uniform, drought-tolerant, and productive, those hybrid sugarcanes were easier to harvest, more efficient to process, and great for making consistent, uniform refined sugar products. But they all tasted the same. You wouldn’t know it from a bag of granulated sugar, but there’s a lot of genetic diversity in sugarcane. Walking the fields at Manulele Distillers, however, it’s obvious. Some canes are so dark they’re almost black. Others are boldly striped in pink, yellow, and green, like a tropical candy cane. Some are very tall, and others are short and stubby. To get the cuttings he used to start his 22-acre farm in 2011, Robert worked with the University of Hawaii’s Agricultural Research division, visited botanical gardens, and bushwhacked into overgrown jungle quarantines to seek out as many varieties of ko that he could find. It wasn’t easy. Replaced by hybrid varieties, some heirloom Hawaiian varieties flirted with extinction, confined to just a handful of specimens. Like many other heirloom and native Hawaiian plants, they faced pressures from introduced pests and animals (one variety was almost destroyed completely by a rogue pig). But Robert persevered, amassing a collection of 36 different

varieties of heirloom Hawaiian sugarcanes. Their goal is to make varietal agricole-style rum from each and every one. So far, they’ve distilled about 10. Production began in earnest in 2013. “Hawaii is a post-Prohibition state,” Robert explains. “So there were no dogmatic laws on the books.” In fact, there were no explicit laws about distilling on the books at all. So Robert teamed up with another distiller on Oahu and added distilleries to the state’s existing winery and brewery laws, a legislative shift that had broad support. He also received training and support from Rusty Figgins, noted industry consultant and founder of the Spirits Institute Puget Sound. Today, Manulele Distillers is in full production. One hundred percent of the cane used in the distillery is grown on-site. Farm manager Wat, originally from Thailand, and with valuable experience managing commercial sugarcane farms in Asia, handharvests about one sixth of an acre of cane at a time, resulting in about four tons of cane that will be pressed to create about 500 gallons of sugarcane juice. To press the cane, Manulele uses a cane mill, a highly specialized piece of equipment that looks something like a gigantic wood chipper. Unpasteurized sugar cane juice oxidizes easily and typically carries many wild yeast and bacteria that can cause spontaneous fermentation quickly, so everything at Manulele is geared towards preserving freshness. The cane mill is located just a few dozen feet from the distillery, and distiller Noah pitches the yeast into each batch of juice even before the pressing is complete. And it’s no ordinary yeast. While Robert was testing a variety of different commercially available yeasts at the Hawaii Agricultural Research Center, he met a man doing the same thing, but for a different industry: cacao processing. As an experiment, Robert tried that cacao yeast on a batch of cane juice. “The flavor profile was awesome,” says Robert. “Champagne yeast was so crisp and clean, and didn’t preserve that grassy note that comes from the cane. I like the cacao yeast so much more. It was vegetal and grassy, but had no sourness to it.” Cane juice ranges from 14 to 22 brix; 18 is about average. WWW.ARTISANSPIRITMAG.COM