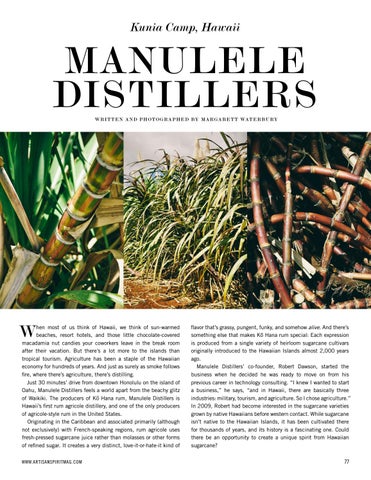 hen most of us think of Hawaii, we think of sun-warmed beaches, resort hotels, and those little chocolate-covered macadamia nut candies your coworkers leave in the break room after their vacation. But there’s a lot more to the islands than tropical tourism. Agriculture has been a staple of the Hawaiian economy for hundreds of years. And just as surely as smoke follows fire, where there’s agriculture, there’s distilling. Just 30 minutes’ drive from downtown Honolulu on the island of Oahu, Manulele Distillers feels a world apart from the beachy glitz of Waikiki. The producers of Ko Hana rum, Manulele Distillers is Hawaii’s first rum agricole distillery, and one of the only producers of agricole-style rum in the United States. Originating in the Caribbean and associated primarily (although not exclusively) with French-speaking regions, rum agricole uses fresh-pressed sugarcane juice rather than molasses or other forms of refined sugar. It creates a very distinct, love-it-or-hate-it kind of

flavor that’s grassy, pungent, funky, and somehow alive. And there’s something else that makes Ko Hana rum special: Each expression is produced from a single variety of heirloom sugarcane cultivars originally introduced to the Hawaiian Islands almost 2,000 years ago. Manulele Distillers’ co-founder, Robert Dawson, started the business when he decided he was ready to move on from his previous career in technology consulting. “I knew I wanted to start a business,” he says, “and in Hawaii, there are basically three industries: military, tourism, and agriculture. So I chose agriculture.” In 2009, Robert had become interested in the sugarcane varieties grown by native Hawaiians before western contact. While sugarcane isn’t native to the Hawaiian Islands, it has been cultivated there for thousands of years, and its history is a fascinating one. Could there be an opportunity to create a unique spirit from Hawaiian sugarcane?