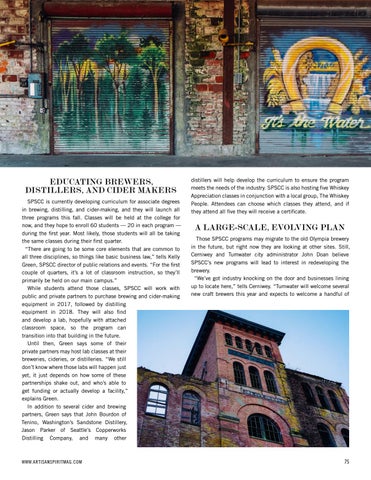 EDUCATING BREWERS, DISTILLERS, AND CIDER MAKERS SPSCC is currently developing curriculum for associate degrees in brewing, distilling, and cider-making, and they will launch all three programs this fall. Classes will be held at the college for now, and they hope to enroll 60 students — 20 in each program — during the first year. Most likely, those students will all be taking the same classes during their first quarter. “There are going to be some core elements that are common to all three disciplines, so things like basic business law,” tells Kelly Green, SPSCC director of public relations and events. “For the first couple of quarters, it’s a lot of classroom instruction, so they’ll primarily be held on our main campus.” While students attend those classes, SPSCC will work with public and private partners to purchase brewing and cider-making equipment in 2017, followed by distilling equipment in 2018. They will also find and develop a lab, hopefully with attached classroom space, so the program can transition into that building in the future. Until then, Green says some of their private partners may host lab classes at their breweries, cideries, or distilleries. “We still don’t know where those labs will happen just yet, it just depends on how some of these partnerships shake out, and who’s able to get funding or actually develop a facility,” explains Green. In addition to several cider and brewing partners, Green says that John Bourdon of Tenino, Washington’s Sandstone Distillery, Jason Parker of Seattle’s Copperworks Distilling Company, and many other

distillers will help develop the curriculum to ensure the program meets the needs of the industry. SPSCC is also hosting five Whiskey Appreciation classes in conjunction with a local group, The Whiskey People. Attendees can choose which classes they attend, and if they attend all five they will receive a certificate.

A LARGE-SCALE, EVOLVING PLAN Those SPSCC programs may migrate to the old Olympia brewery in the future, but right now they are looking at other sites. Still, Cerniwey and Tumwater city administrator John Doan believe SPSCC’s new programs will lead to interest in redeveloping the brewery. “We’ve got industry knocking on the door and businesses lining up to locate here,” tells Cerniwey. “Tumwater will welcome several new craft brewers this year and expects to welcome a handful of