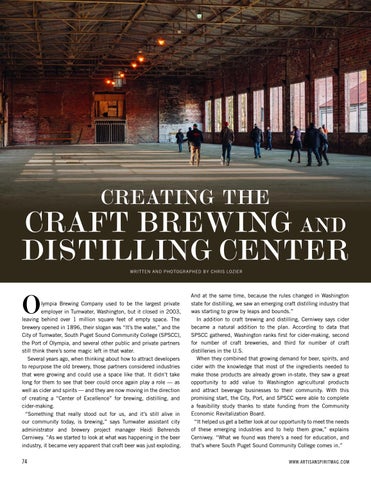 lympia Brewing Company used to be the largest private employer in Tumwater, Washington, but it closed in 2003, leaving behind over 1 million square feet of empty space. The brewery opened in 1896, their slogan was “It’s the water,” and the City of Tumwater, South Puget Sound Community College (SPSCC), the Port of Olympia, and several other public and private partners still think there’s some magic left in that water. Several years ago, when thinking about how to attract developers to repurpose the old brewery, those partners considered industries that were growing and could use a space like that. It didn’t take long for them to see that beer could once again play a role — as well as cider and spirits — and they are now moving in the direction of creating a “Center of Excellence” for brewing, distilling, and cider-making. “Something that really stood out for us, and it’s still alive in our community today, is brewing,” says Tumwater assistant city administrator and brewery project manager Heidi Behrends Cerniwey. “As we started to look at what was happening in the beer industry, it became very apparent that craft beer was just exploding.

And at the same time, because the rules changed in Washington state for distilling, we saw an emerging craft distilling industry that was starting to grow by leaps and bounds.” In addition to craft brewing and distilling, Cerniwey says cider became a natural addition to the plan. According to data that SPSCC gathered, Washington ranks first for cider-making, second for number of craft breweries, and third for number of craft distilleries in the U.S. When they combined that growing demand for beer, spirits, and cider with the knowledge that most of the ingredients needed to make those products are already grown in-state, they saw a great opportunity to add value to Washington agricultural products and attract beverage businesses to their community. With this promising start, the City, Port, and SPSCC were able to complete a feasibility study thanks to state funding from the Community Economic Revitalization Board. “It helped us get a better look at our opportunity to meet the needs of these emerging industries and to help them grow,” explains Cerniwey. “What we found was there’s a need for education, and that’s where South Puget Sound Community College comes in.” WWW.ARTISANSPIRITMAG.COM