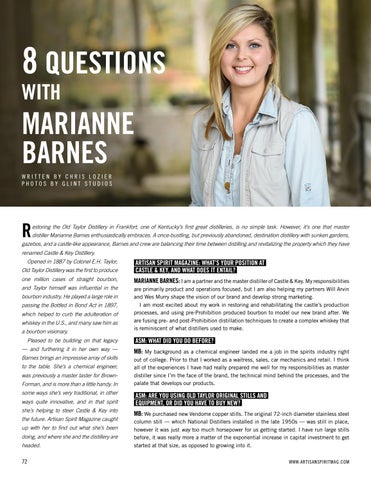 estoring the Old Taylor Distillery in Frankfort, one of Kentucky’s first great distilleries, is no simple task. However, it's one that master distiller Marianne Barnes enthusiastically embraces. A once-bustling, but previously abandoned, destination distillery with sunken gardens,

gazebos, and a castle-like appearance, Barnes and crew are balancing their time between distilling and revitalizing the property which they have renamed Castle & Key Distillery. Opened in 1887 by Colonel E.H. Taylor, Old Taylor Distillery was the first to produce one million cases of straight bourbon, and Taylor himself was influential in the bourbon industry. He played a large role in passing the Bottled in Bond Act in 1897, which helped to curb the adulteration of whiskey in the U.S., and many saw him as a bourbon visionary. Pleased to be building on that legacy — and furthering it in her own way — Barnes brings an impressive array of skills to the table. She’s a chemical engineer, was previously a master taster for BrownForman, and is more than a little handy. In some ways she’s very traditional, in other ways quite innovative, and in that spirit she’s helping to steer Castle & Key into the future. Artisan Spirit Magazine caught up with her to find out what she’s been doing, and where she and the distillery are headed.

ARTISAN SPIRIT MAGAZINE: WHAT’S YOUR POSITION AT CASTLE & KEY, AND WHAT DOES IT ENTAIL? MARIANNE BARNES: I am a partner and the master distiller of Castle & Key. My responsibilities are primarily product and operations focused, but I am also helping my partners Will Arvin and Wes Murry shape the vision of our brand and develop strong marketing. I am most excited about my work in restoring and rehabilitating the castle’s production processes, and using pre-Prohibition produced bourbon to model our new brand after. We are fusing pre- and post-Prohibition distillation techniques to create a complex whiskey that is reminiscent of what distillers used to make. ASM: WHAT DID YOU DO BEFORE? MB: My background as a chemical engineer landed me a job in the spirits industry right out of college. Prior to that I worked as a waitress, sales, car mechanics and retail. I think all of the experiences I have had really prepared me well for my responsibilities as master distiller since I’m the face of the brand, the technical mind behind the processes, and the palate that develops our products.

ASM: ARE YOU USING OLD TAYLOR ORIGINAL STILLS AND EQUIPMENT, OR DID YOU HAVE TO BUY NEW? MB: We purchased new Vendome copper stills. The original 72-inch diameter stainless steel column still — which National Distillers installed in the late 1950s — was still in place, however it was just way too much horsepower for us getting started. I have run large stills before, it was really more a matter of the exponential increase in capital investment to get started at that size, as opposed to growing into it. WWW.ARTISANSPIRITMAG.COM