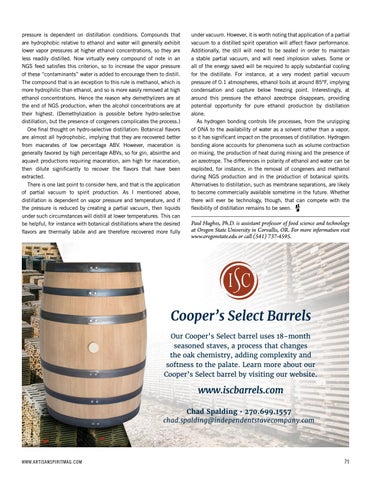 pressure is dependent on distillation conditions. Compounds that are hydrophobic relative to ethanol and water will generally exhibit lower vapor pressures at higher ethanol concentrations, so they are less readily distilled. Now virtually every compound of note in an NGS feed satisfies this criterion, so to increase the vapor pressure of these “contaminants” water is added to encourage them to distill. The compound that is an exception to this rule is methanol, which is more hydrophilic than ethanol, and so is more easily removed at high ethanol concentrations. Hence the reason why demethylizers are at the end of NGS production, when the alcohol concentrations are at their highest. (Demethylization is possible before hydro-selective distillation, but the presence of congeners complicates the process.) One final thought on hydro-selective distillation: Botanical flavors are almost all hydrophobic, implying that they are recovered better from macerates of low percentage ABV. However, maceration is generally favored by high percentage ABVs, so for gin, absinthe and aquavit productions requiring maceration, aim high for maceration, then dilute significantly to recover the flavors that have been extracted. There is one last point to consider here, and that is the application of partial vacuum to spirit production. As I mentioned above, distillation is dependent on vapor pressure and temperature, and if the pressure is reduced by creating a partial vacuum, then liquids under such circumstances will distill at lower temperatures. This can be helpful, for instance with botanical distillations where the desired flavors are thermally labile and are therefore recovered more fully

under vacuum. However, it is worth noting that application of a partial vacuum to a distilled spirit operation will affect flavor performance. Additionally, the still will need to be sealed in order to maintain a stable partial vacuum, and will need implosion valves. Some or all of the energy saved will be required to apply substantial cooling for the distillate. For instance, at a very modest partial vacuum pressure of 0.1 atmospheres, ethanol boils at around 85°F, implying condensation and capture below freezing point. Interestingly, at around this pressure the ethanol azeotrope disappears, providing potential opportunity for pure ethanol production by distillation alone. As hydrogen bonding controls life processes, from the unzipping of DNA to the availability of water as a solvent rather than a vapor, so it has significant impact on the processes of distillation. Hydrogen bonding alone accounts for phenomena such as volume contraction on mixing, the production of heat during mixing and the presence of an azeotrope. The differences in polarity of ethanol and water can be exploited, for instance, in the removal of congeners and methanol during NGS production and in the production of botanical spirits. Alternatives to distillation, such as membrane separations, are likely to become commercially available sometime in the future. Whether there will ever be technology, though, that can compete with the flexibility of distillation remains to be seen.

Paul Hughes, Ph.D. is assistant professor of food science and technology at Oregon State University in Corvallis, OR. For more information visit www.oregonstate.edu or call (541) 737-4595.