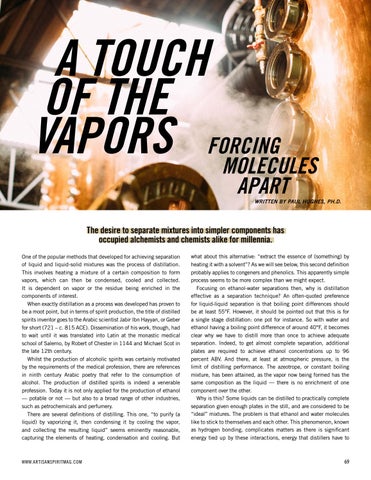 A TOUCH OF THE VAPORS FORCING MOLECULES APART

The desire to separate mixtures into simpler components has occupied alchemists and chemists alike for millennia. One of the popular methods that developed for achieving separation of liquid and liquid-solid mixtures was the process of distillation. This involves heating a mixture of a certain composition to form vapors, which can then be condensed, cooled and collected. It is dependent on vapor or the residue being enriched in the components of interest. When exactly distillation as a process was developed has proven to be a moot point, but in terms of spirit production, the title of distilled spirits inventor goes to the Arabic scientist Jabir Ibn Hayyan, or Geber for short (721 – c. 815 ACE). Dissemination of his work, though, had to wait until it was translated into Latin at the monastic medical school of Salerno, by Robert of Chester in 1144 and Michael Scot in the late 12th century. Whilst the production of alcoholic spirits was certainly motivated by the requirements of the medical profession, there are references in ninth century Arabic poetry that refer to the consumption of alcohol. The production of distilled spirits is indeed a venerable profession. Today it is not only applied for the production of ethanol — potable or not — but also to a broad range of other industries, such as petrochemicals and perfumery. There are several definitions of distilling. This one, “to purify (a liquid) by vaporizing it, then condensing it by cooling the vapor, and collecting the resulting liquid” seems eminently reasonable, capturing the elements of heating, condensation and cooling. But

what about this alternative: “extract the essence of (something) by heating it with a solvent”? As we will see below, this second definition probably applies to congeners and phenolics. This apparently simple process seems to be more complex than we might expect. Focusing on ethanol-water separations then, why is distillation effective as a separation technique? An often-quoted preference for liquid-liquid separation is that boiling point differences should be at least 55°F. However, it should be pointed out that this is for a single stage distillation: one pot for instance. So with water and ethanol having a boiling point difference of around 40°F, it becomes clear why we have to distill more than once to achieve adequate separation. Indeed, to get almost complete separation, additional plates are required to achieve ethanol concentrations up to 96 percent ABV. And there, at least at atmospheric pressure, is the limit of distilling performance. The azeotrope, or constant boiling mixture, has been attained, as the vapor now being formed has the same composition as the liquid — there is no enrichment of one component over the other. Why is this? Some liquids can be distilled to practically complete separation given enough plates in the still, and are considered to be “ideal” mixtures. The problem is that ethanol and water molecules like to stick to themselves and each other. This phenomenon, known as hydrogen bonding, complicates matters as there is significant energy tied up by these interactions, energy that distillers have to