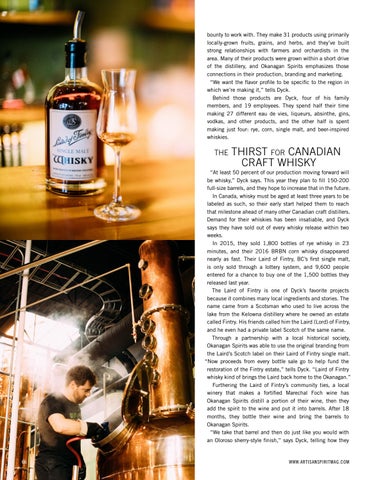 bounty to work with. They make 31 products using primarily locally-grown fruits, grains, and herbs, and they’ve built strong relationships with farmers and orchardists in the area. Many of their products were grown within a short drive of the distillery, and Okanagan Spirits emphasizes those connections in their production, branding and marketing. “We want the flavor profile to be specific to the region in which we’re making it,” tells Dyck. Behind those products are Dyck, four of his family members, and 19 employees. They spend half their time making 27 different eau de vies, liqueurs, absinthe, gins, vodkas, and other products, and the other half is spent making just four: rye, corn, single malt, and beer-inspired whiskies.

“At least 50 percent of our production moving forward will be whisky,” Dyck says. This year they plan to fill 150-200 full-size barrels, and they hope to increase that in the future. In Canada, whisky must be aged at least three years to be labeled as such, so their early start helped them to reach that milestone ahead of many other Canadian craft distillers. Demand for their whiskies has been insatiable, and Dyck says they have sold out of every whisky release within two weeks. In 2015, they sold 1,800 bottles of rye whisky in 23 minutes, and their 2016 BRBN corn whisky disappeared nearly as fast. Their Laird of Fintry, BC’s first single malt, is only sold through a lottery system, and 9,600 people entered for a chance to buy one of the 1,500 bottles they released last year. The Laird of Fintry is one of Dyck’s favorite projects because it combines many local ingredients and stories. The name came from a Scotsman who used to live across the lake from the Kelowna distillery where he owned an estate called Fintry. His friends called him the Laird (Lord) of Fintry, and he even had a private label Scotch of the same name. Through a partnership with a local historical society, Okanagan Spirits was able to use the original branding from the Laird’s Scotch label on their Laird of Fintry single malt. “Now proceeds from every bottle sale go to help fund the restoration of the Fintry estate,” tells Dyck. “Laird of Fintry whisky kind of brings the Laird back home to the Okanagan.” Furthering the Laird of Fintry’s community ties, a local winery that makes a fortified Marechal Foch wine has Okanagan Spirits distill a portion of their wine, then they add the spirit to the wine and put it into barrels. After 18 months, they bottle their wine and bring the barrels to Okanagan Spirits. “We take that barrel and then do just like you would with an Oloroso sherry-style finish,” says Dyck, telling how they