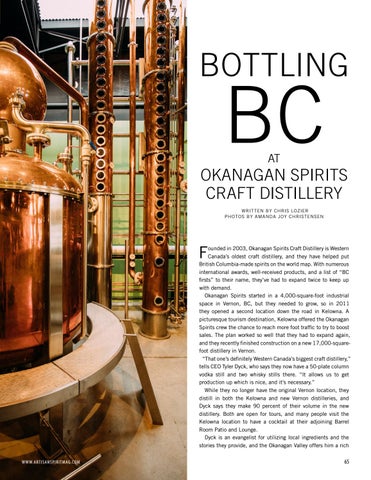 ounded in 2003, Okanagan Spirits Craft Distillery is Western Canada’s oldest craft distillery, and they have helped put British Columbia-made spirits on the world map. With numerous international awards, well-received products, and a list of “BC firsts” to their name, they’ve had to expand twice to keep up with demand. Okanagan Spirits started in a 4,000-square-foot industrial space in Vernon, BC, but they needed to grow, so in 2011 they opened a second location down the road in Kelowna. A picturesque tourism destination, Kelowna offered the Okanagan Spirits crew the chance to reach more foot traffic to try to boost sales. The plan worked so well that they had to expand again, and they recently finished construction on a new 17,000-squarefoot distillery in Vernon. “That one’s definitely Western Canada’s biggest craft distillery,” tells CEO Tyler Dyck, who says they now have a 50-plate column vodka still and two whisky stills there. “It allows us to get production up which is nice, and it’s necessary.” While they no longer have the original Vernon location, they distill in both the Kelowna and new Vernon distilleries, and Dyck says they make 90 percent of their volume in the new distillery. Both are open for tours, and many people visit the Kelowna location to have a cocktail at their adjoining Barrel Room Patio and Lounge. Dyck is an evangelist for utilizing local ingredients and the stories they provide, and the Okanagan Valley offers him a rich