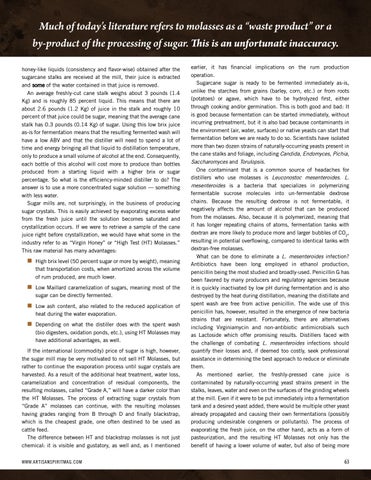 Much of today’s literature refers to molasses as a “waste product” or a by-product of the processing of sugar. This is an unfortunate inaccuracy. honey-like liquids (consistency and flavor-wise) obtained after the sugarcane stalks are received at the mill, their juice is extracted and some of the water contained in that juice is removed. An average freshly-cut cane stalk weighs about 3 pounds (1.4 Kg) and is roughly 85 percent liquid. This means that there are about 2.6 pounds (1.2 Kg) of juice in the stalk and roughly 10 percent of that juice could be sugar, meaning that the average cane stalk has 0.3 pounds (0.14 Kg) of sugar. Using this low brix juice as-is for fermentation means that the resulting fermented wash will have a low ABV and that the distiller will need to spend a lot of time and energy bringing all that liquid to distillation temperature, only to produce a small volume of alcohol at the end. Consequently, each bottle of this alcohol will cost more to produce than bottles produced from a starting liquid with a higher brix or sugar percentage. So what is the efficiency-minded distiller to do? The answer is to use a more concentrated sugar solution — something with less water. Sugar mills are, not surprisingly, in the business of producing sugar crystals. This is easily achieved by evaporating excess water from the fresh juice until the solution becomes saturated and crystallization occurs. If we were to retrieve a sample of the cane juice right before crystallization, we would have what some in the industry refer to as “Virgin Honey” or “High Test (HT) Molasses.” This raw material has many advantages:

   High brix level (50 percent sugar or more by weight), meaning that transportation costs, when amortized across the volume of rum produced, are much lower.

   Low Maillard caramelization of sugars, meaning most of the sugar can be directly fermented.

   Low ash content, also related to the reduced application of heat during the water evaporation.

   Depending on what the distiller does with the spent wash (bio digesters, oxidation ponds, etc.), using HT Molasses may have additional advantages, as well. If the international (commodity) price of sugar is high, however, the sugar mill may be very motivated to not sell HT Molasses, but rather to continue the evaporation process until sugar crystals are harvested. As a result of the additional heat treatment, water loss, caramelization and concentration of residual components, the resulting molasses, called “Grade A,” will have a darker color than the HT Molasses. The process of extracting sugar crystals from “Grade A” molasses can continue, with the resulting molasses having grades ranging from B through D and finally blackstrap, which is the cheapest grade, one often destined to be used as cattle feed. The difference between HT and blackstrap molasses is not just chemical: it is visible and gustatory, as well and, as I mentioned WWW.ARTISANSPIRITMAG.COM

earlier, it has financial implications on the rum production operation. Sugarcane sugar is ready to be fermented immediately as-is, unlike the starches from grains (barley, corn, etc.) or from roots (potatoes) or agave, which have to be hydrolyzed first, either through cooking and/or germination. This is both good and bad: It is good because fermentation can be started immediately, without incurring pretreatment, but it is also bad because contaminants in the environment (air, water, surfaces) or native yeasts can start that fermentation before we are ready to do so. Scientists have isolated more than two dozen strains of naturally-occurring yeasts present in the cane stalks and foliage, including Candida, Endomyces, Pichia, Saccharomyces and Torulopsis. One contaminant that is a common source of headaches for distillers who use molasses is Leuconostoc mesenteroides. L. mesenteroides is a bacteria that specializes in polymerizing fermentable sucrose molecules into un-fermentable dextrose chains. Because the resulting dextrose is not fermentable, it negatively affects the amount of alcohol that can be produced from the molasses. Also, because it is polymerized, meaning that it has longer repeating chains of atoms, fermentation tanks with dextran are more likely to produce more and larger bubbles of CO2, resulting in potential overflowing, compared to identical tanks with dextran-free molasses. What can be done to eliminate a L. mesenteroides infection? Antibiotics have been long employed in ethanol production, penicillin being the most studied and broadly-used. Penicillin G has been favored by many producers and regulatory agencies because it is quickly inactivated by low pH during fermentation and is also destroyed by the heat during distillation, meaning the distillate and spent wash are free from active penicillin. The wide use of this penicillin has, however, resulted in the emergence of new bacteria strains that are resistant. Fortunately, there are alternatives including Virginiamycin and non-antibiotic antimicrobials such as Lactoside which offer promising results. Distillers faced with the challenge of combating L. mesenteroides infections should quantify their losses and, if deemed too costly, seek professional assistance in determining the best approach to reduce or eliminate them. As mentioned earlier, the freshly-pressed cane juice is contaminated by naturally-occurring yeast strains present in the stalks, leaves, water and even on the surfaces of the grinding wheels at the mill. Even if it were to be put immediately into a fermentation tank and a desired yeast added, there would be multiple other yeast already propagated and causing their own fermentations (possibly producing undesirable congeners or pollutants). The process of evaporating the fresh juice, on the other hand, acts as a form of pasteurization, and the resulting HT Molasses not only has the benefit of having a lower volume of water, but also of being more