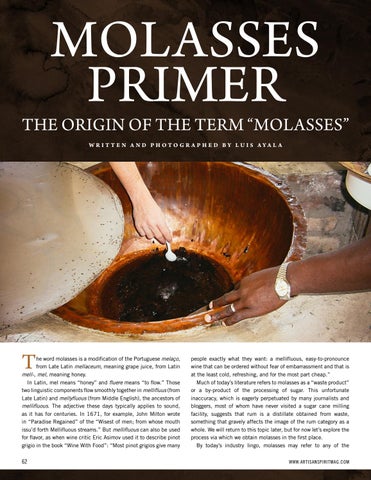 he word molasses is a modification of the Portuguese melaço, from Late Latin mellaceum, meaning grape juice, from Latin mell-, mel, meaning honey. In Latin, mel means “honey” and fluere means “to flow.” Those two linguistic components flow smoothly together in mellifluus (from Late Latin) and mellyfluous (from Middle English), the ancestors of mellifluous. The adjective these days typically applies to sound, as it has for centuries. In 1671, for example, John Milton wrote in “Paradise Regained” of the “Wisest of men; from whose mouth issu’d forth Mellifluous streams.” But mellifluous can also be used for flavor, as when wine critic Eric Asimov used it to describe pinot grigio in the book “Wine With Food”: “Most pinot grigios give many

people exactly what they want: a mellifluous, easy-to-pronounce wine that can be ordered without fear of embarrassment and that is at the least cold, refreshing, and for the most part cheap.” Much of today’s literature refers to molasses as a “waste product” or a by-product of the processing of sugar. This unfortunate inaccuracy, which is eagerly perpetuated by many journalists and bloggers, most of whom have never visited a sugar cane milling facility, suggests that rum is a distillate obtained from waste, something that gravely affects the image of the rum category as a whole. We will return to this topic later, but for now let’s explore the process via which we obtain molasses in the first place. By today’s industry lingo, molasses may refer to any of the WWW.ARTISANSPIRITMAG.COM