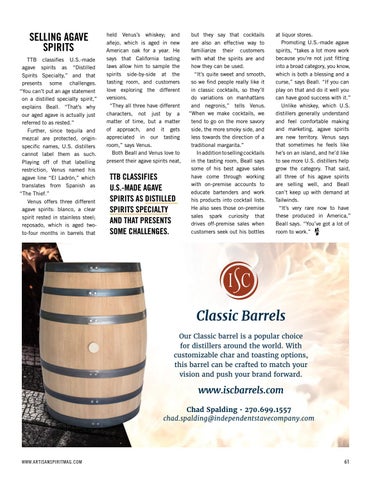 SELLING AGAVE SPIRITS TTB classifies U.S.-made agave spirits as “Distilled Spirits Specialty,” and that presents some challenges. “You can’t put an age statement on a distilled specialty spirit,” explains Beall. “That’s why our aged agave is actually just referred to as rested.” Further, since tequila and mezcal are protected, originspecific names, U.S. distillers cannot label them as such. Playing off of that labelling restriction, Venus named his agave line “El Ladrón,” which translates from Spanish as “The Thief.” Venus offers three different agave spirits: blanco, a clear spirit rested in stainless steel; reposado, which is aged twoto-four months in barrels that

held Venus’s whiskey; and añejo, which is aged in new American oak for a year. He says that California tasting laws allow him to sample the spirits side-by-side at the tasting room, and customers love exploring the different versions. “They all three have different characters, not just by a matter of time, but a matter of approach, and it gets appreciated in our tasting room,” says Venus. Both Beall and Venus love to present their agave spirits neat,

but they say that cocktails are also an effective way to familiarize their customers with what the spirits are and how they can be used. “It’s quite sweet and smooth, so we find people really like it in classic cocktails, so they’ll do variations on manhattans and negronis,” tells Venus. “When we make cocktails, we tend to go on the more savory side, the more smoky side, and less towards the direction of a traditional margarita.” In addition to selling cocktails in the tasting room, Beall says some of his best agave sales have come through working with on-premise accounts to educate bartenders and work his products into cocktail lists. He also sees those on-premise sales spark curiosity that drives off-premise sales when customers seek out his bottles

at liquor stores. Promoting U.S.-made agave spirits, “takes a lot more work because you’re not just fitting into a broad category, you know, which is both a blessing and a curse,” says Beall. “If you can play on that and do it well you can have good success with it.” Unlike whiskey, which U.S. distillers generally understand and feel comfortable making and marketing, agave spirits are new territory. Venus says that sometimes he feels like he’s on an island, and he’d like to see more U.S. distillers help grow the category. That said, all three of his agave spirits are selling well, and Beall can’t keep up with demand at Tailwinds. “It’s very rare now to have these produced in America,” Beall says. “You’ve got a lot of room to work.”

Classic Barrels Our Classic barrel is a popular choice for distillers around the world. With customizable char and toasting options, this barrel can be crafted to match your vision and push your brand forward.