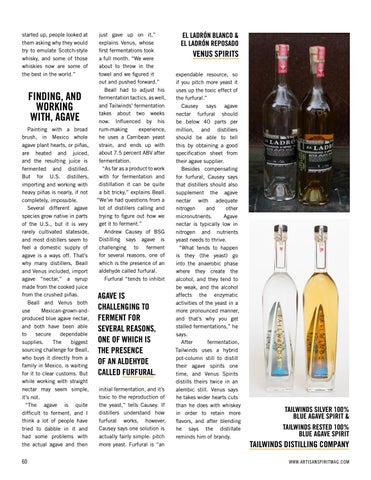 started up, people looked at them asking why they would try to emulate Scotch-style whisky, and some of those whiskies now are some of the best in the world.”

FINDING, AND WORKING WITH, AGAVE Painting with a broad brush, in Mexico whole agave plant hearts, or piñas, are heated and juiced, and the resulting juice is fermented and distilled. But for U.S. distillers, importing and working with heavy piñas is nearly, if not completely, impossible. Several different agave species grow native in parts of the U.S., but it is very rarely cultivated stateside, and most distillers seem to feel a domestic supply of agave is a ways off. That’s why many distillers, Beall and Venus included, import agave “nectar,” a syrup made from the cooked juice from the crushed piñas. Beall and Venus both use Mexican-grown-andproduced blue agave nectar, and both have been able to secure dependable supplies. The biggest sourcing challenge for Beall, who buys it directly from a family in Mexico, is waiting for it to clear customs. But while working with straight nectar may seem simple, it’s not. “The agave is quite difficult to ferment, and I think a lot of people have tried to dabble in it and had some problems with the actual agave and then

just gave up on it,” explains Venus, whose first fermentations took a full month. “We were about to throw in the towel and we figured it out and pushed forward.” Beall had to adjust his fermentation tactics, as well, and Tailwinds’ fermentation takes about two weeks now. Influenced by his rum-making experience, he uses a Carribean yeast strain, and ends up with about 7.5 percent ABV after fermentation. “As far as a product to work with for fermentation and distillation it can be quite a bit tricky,” explains Beall. “We’ve had questions from a lot of distillers calling and trying to figure out how we get it to ferment.” Andrew Causey of BSG Distilling says agave is challenging to ferment for several reasons, one of which is the presence of an aldehyde called furfural. Furfural “tends to inhibit

AGAVE IS CHALLENGING TO FERMENT FOR SEVERAL REASONS, ONE OF WHICH IS THE PRESENCE OF AN ALDEHYDE CALLED FURFURAL. initial fermentation, and it’s toxic to the reproduction of the yeast,” tells Causey. If distillers understand how furfural works, however, Causey says one solution is actually fairly simple: pitch more yeast. Furfural is “an

VENUS SPIRITS expendable resource, so if you pitch more yeast it uses up the toxic effect of the furfural.” Causey says agave nectar furfural should be below 40 parts per million, and distillers should be able to tell this by obtaining a good specification sheet from their agave supplier. Besides compensating for furfural, Causey says that distillers should also supplement the agave nectar with adequate nitrogen and other micronutrients. Agave nectar is typically low in nitrogen and nutrients yeast needs to thrive. “What tends to happen is they (the yeast) go into the anaerobic phase where they create the alcohol, and they tend to be weak, and the alcohol affects the enzymatic activities of the yeast in a more pronounced manner, and that’s why you get stalled fermentations,” he says. After fermentation, Tailwinds uses a hybrid pot-column still to distill their agave spirits one time, and Venus Spirits distills theirs twice in an alembic still. Venus says he takes wider hearts cuts than he does with whiskey in order to retain more flavors, and after blending he says the distillate reminds him of brandy.