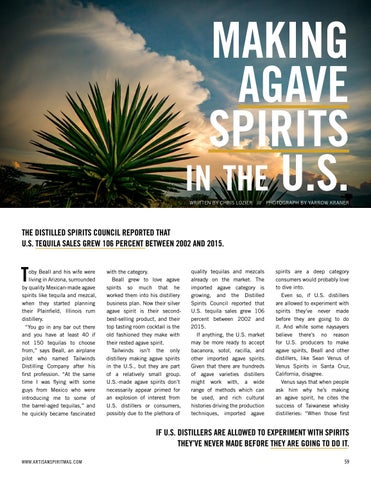 THE DISTILLED SPIRITS COUNCIL REPORTED THAT U.S. TEQUILA SALES GREW 106 PERCENT BETWEEN 2002 AND 2015.

oby Beall and his wife were living in Arizona, surrounded by quality Mexican-made agave spirits like tequila and mezcal, when they started planning their Plainfield, Illinois rum distillery. “You go in any bar out there and you have at least 40 if not 150 tequilas to choose from,” says Beall, an airplane pilot who named Tailwinds Distilling Company after his first profession. “At the same time I was flying with some guys from Mexico who were introducing me to some of the barrel-aged tequilas,” and he quickly became fascinated

with the category. Beall grew to love agave spirits so much that he worked them into his distillery business plan. Now their silver agave spirit is their secondbest-selling product, and their top tasting room cocktail is the old fashioned they make with their rested agave spirit. Tailwinds isn’t the only distillery making agave spirits in the U.S., but they are part of a relatively small group. U.S.-made agave spirits don’t necessarily appear primed for an explosion of interest from U.S. distillers or consumers, possibly due to the plethora of

quality tequilas and mezcals already on the market. The imported agave category is growing, and the Distilled Spirits Council reported that U.S. tequila sales grew 106 percent between 2002 and 2015. If anything, the U.S. market may be more ready to accept bacanora, sotol, racilla, and other imported agave spirits. Given that there are hundreds of agave varieties distillers might work with, a wide range of methods which can be used, and rich cultural histories driving the production techniques, imported agave

spirits are a deep category consumers would probably love to dive into. Even so, if U.S. distillers are allowed to experiment with spirits they’ve never made before they are going to do it. And while some naysayers believe there’s no reason for U.S. producers to make agave spirits, Beall and other distillers, like Sean Venus of Venus Spirits in Santa Cruz, California, disagree. Venus says that when people ask him why he’s making an agave spirit, he cites the success of Taiwanese whisky distilleries: “When those first

IF U.S. DISTILLERS ARE ALLOWED TO EXPERIMENT WITH SPIRITS THEY’VE NEVER MADE BEFORE THEY ARE GOING TO DO IT. WWW.ARTISANSPIRITMAG.COM