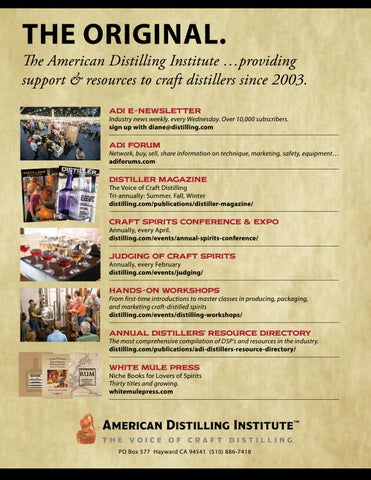 A publica tion of the

As Went Beer, So Goes Spirit s Pay to Play and the Impac Cocktail Culturt on e

Annual Distillers’ Resource Directory The most comprehensive compilation of DSP’s and resources in the industry. distilling.com/publications/adi-distillers-resource-directory/ The Distiller’s Guide to Rum

ding and packaging design for craft spirits. designing successful brands to share best lishing your brand strategy, selecting the rcing materials. Distributors, bar owners dering which brands to carry, and successights from the front lines. ers, designers and spirit lovers. Over 150 f excellence in packaging. It offers expert looking to create a premium brand that

The Distiller’s Guide to

This book was inspired by the recent popularity of rum among the cocktail circles, and by the advent of so many new rum distilleries in North America. Rum is now being made in micro-distilleries all over the United States, including a return to the original epicenter of rum distilling, Newport, Rhode Island. At the time of the American Revolution, there were about 30 rum distilleries in Rhode Island, 22 of which were in Newport alone, and the rum produced there was revered by some as the best in the world. The last Rhode Island rum distillery of that era closed in the 1840s. But, now they are coming back and not only in Rhode Island, but in all of New England, and across the United States and Canada.

In this book, you’ll read about the story of rum and how it is made, written by the well-known distillery expert, Michael Delevante. The book also details the ingredients, equipment, and processes used to make rum. You will learn about the lubricious effects of barrel aging, and the various ways that it is done. And, there is a chapter that explains step-by-step how to make a 155-gallon batch of rum mash and how to distill and age it, written by Ian Smiley.This chapter gives a new micro-distillery a proven recipe and process to get a running start in producing their first product. There is also a chapter on the batch distillation of rum using a hybrid batch distillation system comprised of a pot still and a rectification column written by Eric Watson of AlBevCon.