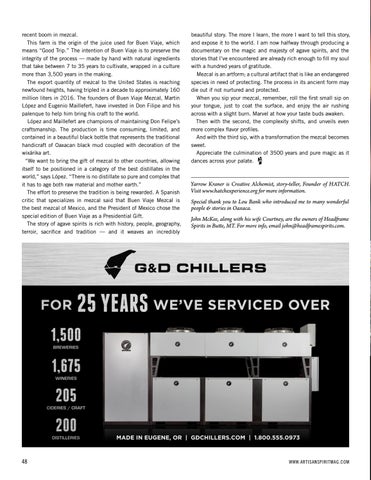 recent boom in mezcal. This farm is the origin of the juice used for Buen Viaje, which means “Good Trip.” The intention of Buen Viaje is to preserve the integrity of ​​the process — made by hand with natural ingredients that take between 7 to 35 years to cultivate, wrapped in a culture more than 3,500 years in the making. The export quantity of mezcal to the United States is reaching newfound heights, having tripled in a decade to approximately 160 million liters in 2016. The founders of Buen Viaje Mezcal, Martin López and Eugenio Maillefert, have invested in Don Filipe and his palenque to help him bring his craft to the world. López and Maillefert are champions of maintaining Don Felipe’s craftsmanship. The production is time consuming, limited, and contained in a beautiful black bottle that represents the traditional handicraft of Oaxacan black mud coupled with decoration of the wixárika art. “We want to bring the gift of mezcal to other countries, allowing itself to be positioned in a category of the best distillates in the world,” says López. “There is no distillate so pure and complex that it has to age both raw material and mother earth.” The effort to preserve the tradition is being rewarded. A Spanish critic that specializes in mezcal said that Buen Viaje Mezcal is the best mezcal of Mexico, and the President of Mexico chose the special edition of Buen Viaje as a Presidential Gift. The story of agave spirits is rich with history, people, geography, terroir, sacrifice and tradition — and it weaves an incredibly

beautiful story. The more I learn, the more I want to tell this story, and expose it to the world. I am now halfway through producing a documentary on the magic and majesty of agave spirits, and the stories that I’ve encountered are already rich enough to fill my soul with a hundred years of gratitude. Mezcal is an artform; a cultural artifact that is like an endangered species in need of protecting. The process in its ancient form may die out if not nurtured and protected. When you sip your mezcal, remember, roll the first small sip on your tongue, just to coat the surface, and enjoy the air rushing across with a slight burn. Marvel at how your taste buds awaken. Then with the second, the complexity shifts, and unveils even more complex flavor profiles. And with the third sip, with a transformation the mezcal becomes sweet. Appreciate the culmination of 3500 years and pure magic as it dances across your palate.

Yarrow Kraner is Creative Alchemist, story-teller, Founder of HATCH. Visit www.hatchexperience.org for more information. Special thank you to Lou Bank who introduced me to many wonderful people & stories in Oaxaca.  John McKee, along with his wife Courtney, are the owners of Headframe Spirits in Butte, MT. For more info, email john@headframespirits.com.