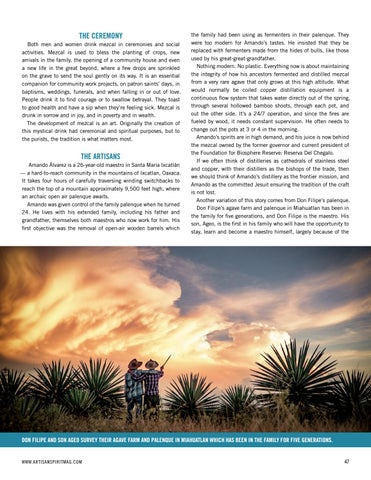 THE CEREMONY Both men and women drink mezcal in ceremonies and social activities. Mezcal is used to bless the planting of crops, new arrivals in the family, the opening of a community house and even a new life in the great beyond, where a few drops are sprinkled on the grave to send the soul gently on its way. It is an essential companion for community work projects, on patron saints’ days, in baptisms, weddings, funerals, and when falling in or out of love. People drink it to find courage or to swallow betrayal. They toast to good health and have a sip when they’re feeling sick. Mezcal is drunk in sorrow and in joy, and in poverty and in wealth. The development of mezcal is an art. Originally the creation of this mystical drink had ceremonial and spiritual purposes, but to the purists, the tradition is what matters most.

THE ARTISANS Amando Álvarez is a 26-year-old maestro in Santa Maria Ixcatlán — a hard-to-reach community in the mountains of Ixcatlan, Oaxaca. It takes four hours of carefully traversing winding switchbacks to reach the top of a mountain approximately 9,500 feet high, where an archaic open air palenque awaits. Amando was given control of the family palenque when he turned 24. He lives with his extended family, including his father and grandfather, themselves both maestros who now work for him. His first objective was the removal of open-air wooden barrels which

the family had been using as fermenters in their palenque. They were too modern for Amando’s tastes. He insisted that they be replaced with fermenters made from the hides of bulls, like those used by his great-great-grandfather. Nothing modern. No plastic. Everything now is about maintaining the integrity of how his ancestors fermented and distilled mezcal from a very rare agave that only grows at this high altitude. What would normally be coiled copper distillation equipment is a continuous flow system that takes water directly out of the spring, through several hollowed bamboo shoots, through each pot, and out the other side. It’s a 24/7 operation, and since the fires are fueled by wood, it needs constant supervision. He often needs to change out the pots at 3 or 4 in the morning. Amando’s spirits are in high demand, and his juice is now behind the mezcal owned by the former governor and current president of the Foundation for Biosphere Reserve: Reserva Del Chegalo. If we often think of distilleries as cathedrals of stainless steel and copper, with their distillers as the bishops of the trade, then we should think of Amando’s distillery as the frontier mission, and Amando as the committed Jesuit ensuring the tradition of the craft is not lost. Another variation of this story comes from Don Filipe’s palenque. Don Filipe’s agave farm and palenque in Miahuatlan has been in the family for five generations, and Don Filipe is the maestro. His son, Ageo, is the first in his family who will have the opportunity to stay, learn and become a maestro himself, largely because of the

DON FILIPE AND SON AGEO SURVEY THEIR AGAVE FARM AND PALENQUE IN MIAHUATLAN WHICH HAS BEEN IN THE FAMILY FOR FIVE GENERATIONS. WWW.ARTISANSPIRITMAG.COM