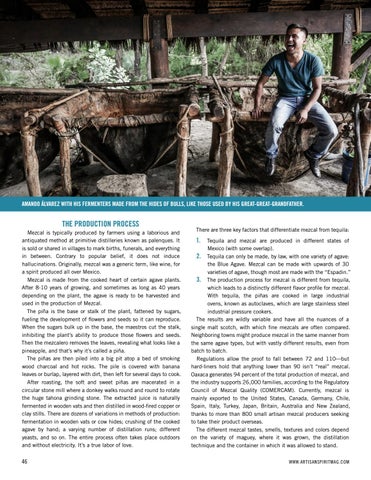 AMANDO ÁLVAREZ WITH HIS FERMENTERS MADE FROM THE HIDES OF BULLS, LIKE THOSE USED BY HIS GREAT-GREAT-GRANDFATHER.

THE PRODUCTION PROCESS Mezcal is typically produced by farmers using a laborious and antiquated method at primitive distilleries known as palenques. It is sold or shared in villages to mark births, funerals, and everything in between. Contrary to popular belief, it does not induce hallucinations. Originally, mezcal was a generic term, like wine, for a spirit produced all over Mexico. Mezcal is made from the cooked heart of certain agave plants. After 8-10 years of growing, and sometimes as long as 40 years depending on the plant, the agave is ready to be harvested and used in the production of Mezcal. The piña is the base or stalk of the plant, fattened by sugars, fueling the development of flowers and seeds so it can reproduce. When the sugars bulk up in the base, the maestros cut the stalk, inhibiting the plant’s ability to produce those flowers and seeds. Then the mezcalero removes the leaves, revealing what looks like a pineapple, and that’s why it’s called a piña. The piñas are then piled into a big pit atop a bed of smoking wood charcoal and hot rocks. The pile is covered with banana leaves or burlap, layered with dirt, then left for several days to cook. After roasting, the soft and sweet piñas are macerated in a circular stone mill where a donkey walks round and round to rotate the huge tahona grinding stone. The extracted juice is naturally fermented in wooden vats and then distilled in wood-fired copper or clay stills. There are dozens of variations in methods of production: fermentation in wooden vats or cow hides; crushing of the cooked agave by hand; a varying number of distillation runs; different yeasts, and so on. The entire process often takes place outdoors and without electricity. It’s a true labor of love.

There are three key factors that differentiate mezcal from tequila:

1. Tequila and mezcal are produced in different states of Mexico (with some overlap).

2. Tequila can only be made, by law, with one variety of agave: the Blue Agave. Mezcal can be made with upwards of 30 varieties of agave, though most are made with the “Espadin.” 3. The production process for mezcal is different from tequila, which leads to a distinctly different flavor profile for mezcal. With tequila, the piñas are cooked in large industrial ovens, known as autoclaves, which are large stainless steel industrial pressure cookers. The results are wildly variable and have all the nuances of a single malt scotch, with which fine mezcals are often compared. Neighboring towns might produce mezcal in the same manner from the same agave types, but with vastly different results, even from batch to batch. Regulations allow the proof to fall between 72 and 110—but hard-liners hold that anything lower than 90 isn’t “real” mezcal. Oaxaca generates 94 percent of the total production of mezcal, and the industry supports 26,000 families, according to the Regulatory Council of Mezcal Quality (COMERCAM). Currently, mezcal is mainly exported to the United States, Canada, Germany, Chile, Spain, Italy, Turkey, Japan, Britain, Australia and New Zealand, thanks to more than 800 small artisan mezcal producers seeking to take their product overseas. The different mezcal tastes, smells, textures and colors depend on the variety of maguey, where it was grown, the distillation technique and the container in which it was allowed to stand. WWW.ARTISANSPIRITMAG.COM