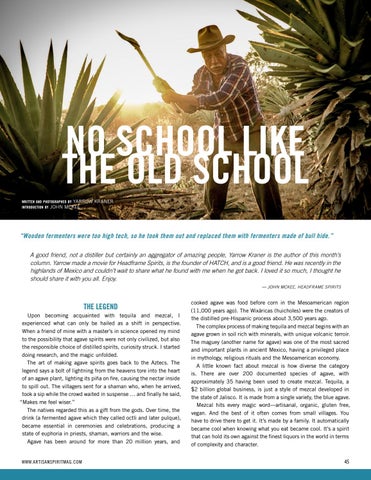 “Wooden fermenters were too high tech, so he took them out and replaced them with fermenters made of bull hide.” A good friend, not a distiller but certainly an aggregator of amazing people, Yarrow Kraner is the author of this month’s column. Yarrow made a movie for Headframe Spirits, is the founder of HATCH, and is a good friend. He was recently in the highlands of Mexico and couldn’t wait to share what he found with me when he got back. I loved it so much, I thought he should share it with you all. Enjoy. 

THE LEGEND Upon becoming acquainted with tequila and mezcal, I experienced what can only be hailed as a shift in perspective. When a friend of mine with a master’s in science opened my mind to the possibility that agave spirits were not only civilized, but also the responsible choice of distilled spirits, curiosity struck. I started doing research, and the magic unfolded. The art of making agave spirits goes back to the Aztecs. The legend says a bolt of lightning from the heavens tore into the heart of an agave plant, lighting its piña on fire, causing the nectar inside to spill out. The villagers sent for a shaman who, when he arrived, took a sip while the crowd waited in suspense … and finally he said, “Makes me feel wiser.” The natives regarded this as a gift from the gods. Over time, the drink (a fermented agave which they called octli and later pulque), became essential in ceremonies and celebrations, producing a state of euphoria in priests, shaman, warriors and the wise. Agave has been around for more than 20 million years, and WWW.ARTISANSPIRITMAG.COM

cooked agave was food before corn in the Mesoamerican region (11,000 years ago). The Wixáricas (huicholes) were the creators of the distilled pre-Hispanic process about 3,500 years ago. The complex process of making tequila and mezcal begins with an agave grown in soil rich with minerals, with unique volcanic terroir. The maguey (another name for agave) was one of the most sacred and important plants in ancient Mexico, having a privileged place in mythology, religious rituals and the Mesoamerican economy. A little known fact about mezcal is how diverse the category is. There are over 200 documented species of agave, with approximately 35 having been used to create mezcal. Tequila, a $2 billion global business, is just a style of mezcal developed in the state of Jalisco. It is made from a single variety, the blue agave. Mezcal hits every magic word—artisanal, organic, gluten free, vegan. And the best of it often comes from small villages. You have to drive there to get it. It’s made by a family. It automatically became cool when knowing what you eat became cool. It’s a spirit that can hold its own against the finest liquors in the world in terms of complexity and character.