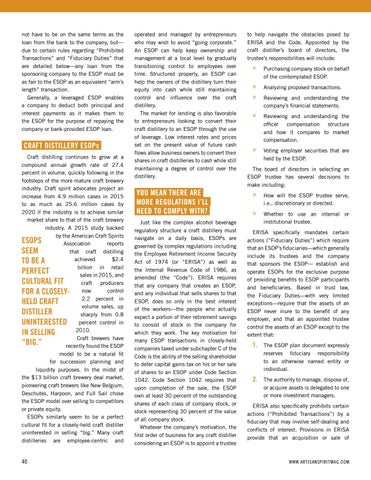 not have to be on the same terms as the loan from the bank to the company, but— due to certain rules regarding “Prohibited Transactions” and “Fiduciary Duties” that are detailed below—any loan from the sponsoring company to the ESOP must be as fair to the ESOP as an equivalent “arm’s length” transaction. Generally, a leveraged ESOP enables a company to deduct both principal and interest payments as it makes them to the ESOP for the purpose of repaying the company or bank-provided ESOP loan.

CRAFT DISTILLERY ESOPs Craft distilling continues to grow at a compound annual growth rate of 27.4 percent in volume, quickly following in the footsteps of the more mature craft brewery industry. Craft spirit advocates project an increase from 4.9 million cases in 2015 to as much as 25.6 million cases by 2020 if the industry is to achieve similar market share to that of the craft brewery industry. A 2015 study backed by the American Craft Spirits ESOPS Association reports that craft distilling SEEM achieved $2.4 TO BE A billion in retail PERFECT sales in 2015, and CULTURAL FIT craft producers now control FOR A CLOSELY2.2 percent in HELD CRAFT volume sales, up DISTILLER sharply from 0.8 UNINTERESTED percent control in 2010. IN SELLING Craft brewers have “BIG.” recently found the ESOP model to be a natural fit for succession planning and liquidity purposes. In the midst of the $13 billion craft brewery deal market, pioneering craft brewers like New Belgium, Deschutes, Harpoon, and Full Sail chose the ESOP model over selling to competitors or private equity. ESOPs similarly seem to be a perfect cultural fit for a closely-held craft distiller uninterested in selling “big.” Many craft distilleries are employee-centric and

operated and managed by entrepreneurs who may wish to avoid “going corporate.” An ESOP can help keep ownership and management at a local level by gradually transitioning control to employees over time. Structured properly, an ESOP can help the owners of the distillery turn their equity into cash while still maintaining control and influence over the craft distillery. The market for lending is also favorable to entrepreneurs looking to convert their craft distillery to an ESOP through the use of leverage. Low interest rates and prices set on the present value of future cash flows allow business owners to convert their shares in craft distilleries to cash while still maintaining a degree of control over the distillery.

YOU MEAN THERE ARE MORE REGULATIONS I’LL NEED TO COMPLY WITH? Just like the complex alcohol beverage regulatory structure a craft distillery must navigate on a daily basis, ESOPs are governed by complex regulations including the Employee Retirement Income Security Act of 1974 (or “ERISA”) as well as the Internal Revenue Code of 1986, as amended (the “Code”). ERISA requires that any company that creates an ESOP, and any individual that sells shares to that ESOP, does so only in the best interest of the workers—the people who actually expect a portion of their retirement savings to consist of stock in the company for which they work. The key motivation for many ESOP transactions in closely-held companies taxed under subchapter C of the Code is the ability of the selling shareholder to defer capital gains tax on his or her sale of shares to an ESOP under Code Section 1042. Code Section 1042 requires that upon completion of the sale, the ESOP own at least 30 percent of the outstanding shares of each class of company stock, or stock representing 30 percent of the value of all company stock. Whatever the company’s motivation, the first order of business for any craft distiller considering an ESOP is to appoint a trustee

to help navigate the obstacles posed by ERISA and the Code. Appointed by the craft distiller’s board of directors, the trustee’s responsibilities will include:

Purchasing company stock on behalf of the contemplated ESOP.

Reviewing and understanding the officer compensation structure and how it compares to market compensation.

Voting employer securities that are held by the ESOP.

The board of directors in selecting an ESOP trustee has several decisions to make including:

How will the ESOP trustee serve, i.e., discretionary or directed.

Whether to use an internal or institutional trustee.

ERISA specifically mandates certain actions (“Fiduciary Duties”) which require that an ESOP’s fiduciaries—which generally include its trustees and the company that sponsors the ESOP— establish and operate ESOPs for the exclusive purpose of providing benefits to ESOP participants and beneficiaries. Based in trust law, the Fiduciary Duties—with very limited exceptions—require that the assets of an ESOP never inure to the benefit of any employer, and that an appointed trustee control the assets of an ESOP except to the extent that:

2. The authority to manage, dispose of, or acquire assets is delegated to one or more investment managers. ERISA also specifically prohibits certain actions (“Prohibited Transactions”) by a fiduciary that may involve self-dealing and conflicts of interest. Provisions in ERISA provide that an acquisition or sale of