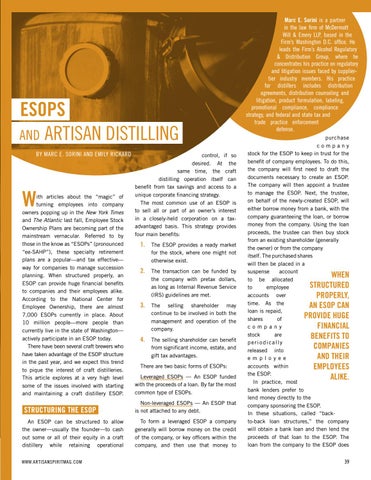 ith articles about the “magic” of turning employees into company owners popping up in the New York Times and The Atlantic last fall, Employee Stock Ownership Plans are becoming part of the mainstream vernacular. Referred to by those in the know as “ESOPs” (pronounced “ee-SAHP”), these specialty retirement plans are a popular—and tax effective— way for companies to manage succession planning. When structured properly, an ESOP can provide huge financial benefits to companies and their employees alike. According to the National Center for Employee Ownership, there are almost 7,000 ESOPs currently in place. About 10 million people—more people than currently live in the state of Washington— actively participate in an ESOP today. There have been several craft brewers who have taken advantage of the ESOP structure in the past year, and we expect this trend to pique the interest of craft distilleries. This article explores at a very high level some of the issues involved with starting and maintaining a craft distillery ESOP.

STRUCTURING THE ESOP An ESOP can be structured to allow the owner—usually the founder—to cash out some or all of their equity in a craft distillery while retaining operational WWW.ARTISANSPIRITMAG.COM

control, if so desired. At the same time, the craft distilling operation itself can benefit from tax savings and access to a unique corporate financing strategy. The most common use of an ESOP is to sell all or part of an owner’s interest in a closely-held corporation on a taxadvantaged basis. This strategy provides four main benefits:

1. The ESOP provides a ready market for the stock, where one might not otherwise exist.

2. The transaction can be funded by the company with pretax dollars, as long as Internal Revenue Service (IRS) guidelines are met.

selling shareholder may continue to be involved in both the management and operation of the company.

4. The selling shareholder can benefit from significant income, estate, and gift tax advantages. There are two basic forms of ESOPs: Leveraged ESOPs — An ESOP funded with the proceeds of a loan. By far the most common type of ESOPs. Non-leveraged ESOPs — An ESOP that is not attached to any debt. To form a leveraged ESOP a company generally will borrow money on the credit of the company, or key officers within the company, and then use that money to

Marc E. Sorini is a partner in the law firm of McDermott Will &amp; Emery LLP, based in the Firm’s Washington D.C. office. He leads the Firm’s Alcohol Regulatory &amp; Distribution Group, where he concentrates his practice on regulatory and litigation issues faced by suppliertier industry members. His practice for distillers includes distribution agreements, distribution counseling and litigation, product formulation, labeling, promotional compliance, compliance strategy, and federal and state tax and trade practice enforcement defense. purchase company stock for the ESOP to keep in trust for the benefit of company employees. To do this, the company will first need to draft the documents necessary to create an ESOP. The company will then appoint a trustee to manage the ESOP. Next, the trustee, on behalf of the newly-created ESOP, will either borrow money from a bank, with the company guaranteeing the loan, or borrow money from the company. Using the loan proceeds, the trustee can then buy stock from an existing shareholder (generally the owner) or from the company itself. The purchased shares will then be placed in a suspense account WHEN to be allocated STRUCTURED to employee accounts over PROPERLY, time. As the AN ESOP CAN loan is repaid, PROVIDE HUGE shares of FINANCIAL company stock are BENEFITS TO periodically COMPANIES released into AND THEIR e m p l o y e e accounts within EMPLOYEES the ESOP. ALIKE. In practice, most bank lenders prefer to lend money directly to the company sponsoring the ESOP. In these situations, called “backto-back loan structures,” the company will obtain a bank loan and then lend the proceeds of that loan to the ESOP. The loan from the company to the ESOP does