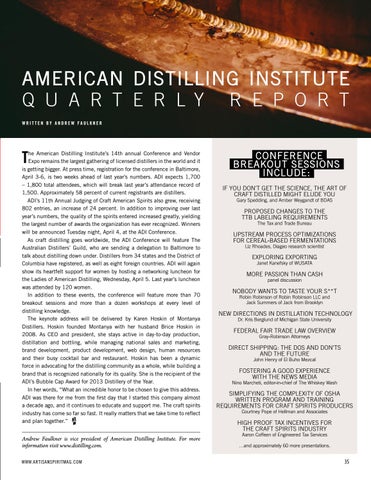 he American Distilling Institute’s 14th annual Conference and Vendor Expo remains the largest gathering of licensed distillers in the world and it is getting bigger. At press time, registration for the conference in Baltimore, April 3-6, is two weeks ahead of last year’s numbers. ADI expects 1,700 – 1,800 total attendees, which will break last year’s attendance record of 1,500. Approximately 58 percent of current registrants are distillers. ADI’s 11th Annual Judging of Craft American Spirits also grew, receiving 802 entries, an increase of 24 percent. In addition to improving over last year’s numbers, the quality of the spirits entered increased greatly, yielding the largest number of awards the organization has ever recognized. Winners will be announced Tuesday night, April 4, at the ADI Conference. As craft distilling goes worldwide, the ADI Conference will feature The Australian Distillers’ Guild, who are sending a delegation to Baltimore to talk about distilling down under. Distillers from 34 states and the District of Columbia have registered, as well as eight foreign countries. ADI will again show its heartfelt support for women by hosting a networking luncheon for the Ladies of American Distilling, Wednesday, April 5. Last year’s luncheon was attended by 120 women. In addition to these events, the conference will feature more than 70 breakout sessions and more than a dozen workshops at every level of distilling knowledge. The keynote address will be delivered by Karen Hoskin of Montanya Distillers. Hoskin founded Montanya with her husband Brice Hoskin in 2008. As CEO and president, she stays active in day-to-day production, distillation and bottling, while managing national sales and marketing, brand development, product development, web design, human resources and their busy cocktail bar and restaurant. Hoskin has been a dynamic force in advocating for the distilling community as a whole, while building a brand that is recognized nationally for its quality. She is the recipient of the ADI’s Bubble Cap Award for 2013 Distillery of the Year. In her words, “What an incredible honor to be chosen to give this address. ADI was there for me from the first day that I started this company almost a decade ago, and it continues to educate and support me. The craft spirits industry has come so far so fast. It really matters that we take time to reflect and plan together.”

CONFERENCE BREAKOUT SESSIONS INCLUDE: IF YOU DON’T GET THE SCIENCE, THE ART OF CRAFT DISTILLED MIGHT ELUDE YOU Gary Spedding, and Amber Weygandt of BDAS

DIRECT SHIPPING: THE DOS AND DON’TS AND THE FUTURE John Henry of El Buho Mezcal

FOSTERING A GOOD EXPERIENCE WITH THE NEWS MEDIA